Today I’ll take a look at Saramonic’s new Blink 900 B2, two channel wireless microphone system and put it through its paces. While Saramonic’s $399 package is priced $100 higher than the Rode Wireless GO II kit, could it be the better value? The accompanying video review appears at the end of this post.

Allow me to say upfront that I purchased every product shown in this video and the manufacturers were not informed of my purchase or review. The opinions expressed in this story and the accompanying video are my own. Now, let’s get started. 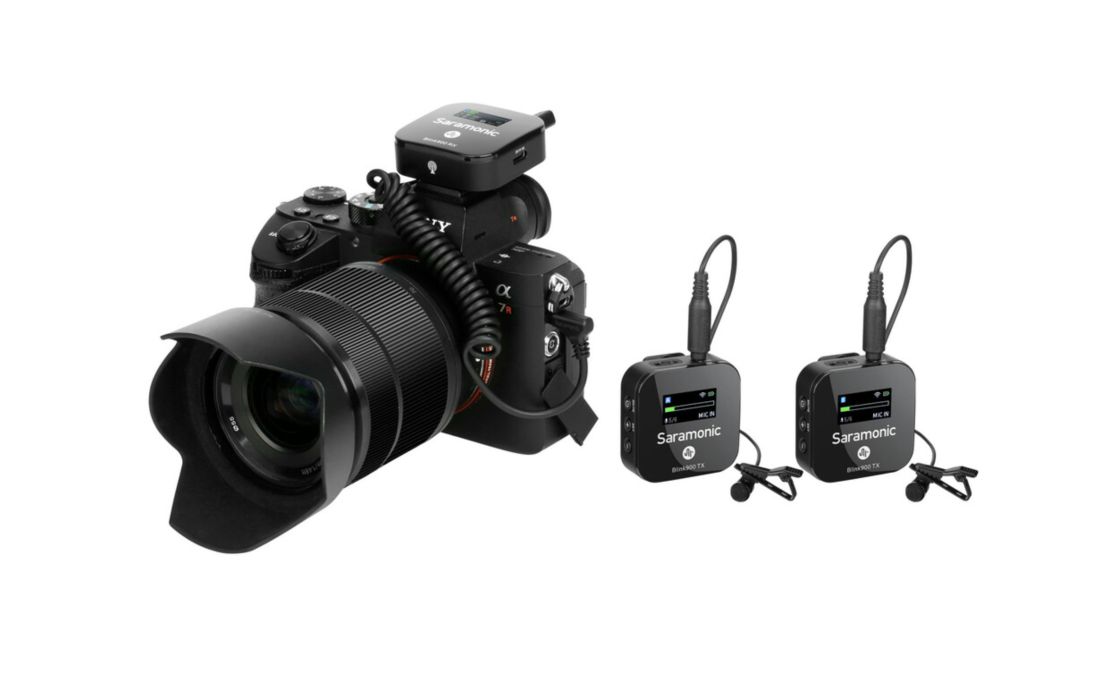 In case you’re not familiar with two channel wireless microphone systems, it’s not that complicated. In simple terms, a transmitter is a microphone body pack and a receiver is the device that’s mounted to the camera and connected to its microphone input. The transmitters, use the 2.4GHz frequency to send the audio signal from the transmitter to the receiver and, depending on your surroundings they can remain connected for a few hundred feet. Essentially, wireless microphones cut the cord and provide freedom of movement within your production.

Here’s what the Saramonic Blink 900 B2 and the Rode Wireless Go II have in common. Both include two tiny transmitters and one receiver and are are ideal for two person interviews. Both have the ability to record in either stereo or mono modes. Both models incorporate a built in microphone while including a mic jack that allows for a wired lavaliere microphone to be used. And, both models incorporate spring loaded clips that allow the transmitters to be clipped to a shirt or belt and the receiver to attach to a camera’s cold shoe mount. Both models allow for the connection of a wired lavaliere into each transmitter and incorporate a built in microphone into the transmitter. 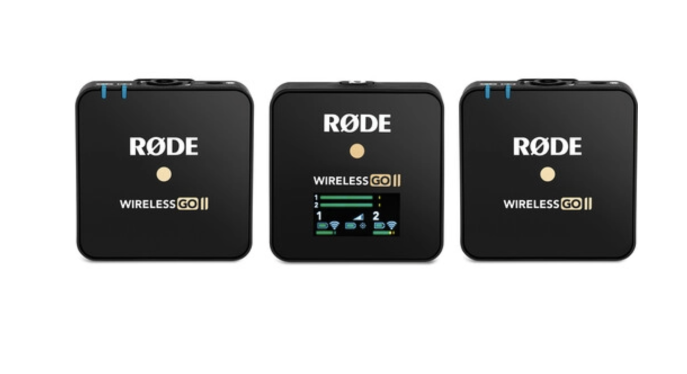 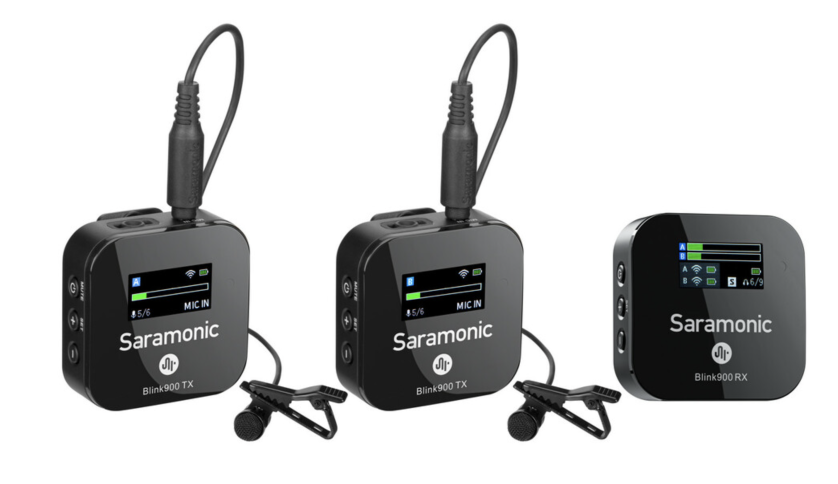 One feature that’s included on the Blink B2 that you won’t find on the Wireless GO II is that the receiver incorporates a headphone jack. When connected to a camera that doesn’t have a headphone jack, is a good way for the camera operator to monitor the audio to make sure there’s not interference between the transmitter and receiver.

Now, let’s talk about range. Both models have a stated range of more than 600 feet in line of sight. However that can be a bit misleading as there are many factors that can affect range. While there’s no shortage of videos doing range tests that demonstrate how far the transmitter and receiver can be separated before experiencing drop outs or lost signals, since I consider these devices ideal for two person interviews, I’ve never performed an interview where the camera is placed 600 feet from the subjects. So, in my opinion, if a 2.4GHz microphone can go 25 feet in both line of sight and, when blocked, I’ll call it a win.

Here’s what’s included with the $299 Rode Wireless GO II kit. Of course you get the receiver and two transmitters. You also get three wind muffs, three USB to USB-C charging cables, a camera connection cable and a carrying pouch.

Here’s what’s included with the $399 Saramonic Blink 900 B2 Kit: Two transmitters and one receiver, two wind muffs, both TRS and TRRS cables, a USB-C charging cable, both USB-C and Lightning charging cables, two lavaliere microphones and a charging case that allows for all three devices to be charged with a single cable. The charging case also incorporates a rechargeable battery that can refresh each unit up to three times. Each device is rated for a six hour battery life between charges. 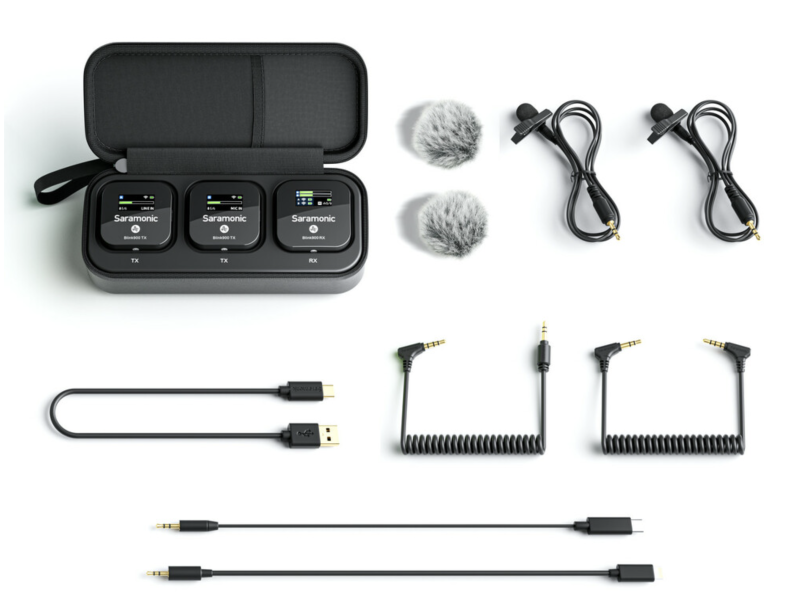 The interior of the charging case includes a small pocket that can store a lavaliere and a connection cable. Personally, my only complaint is that since so many accessories are included, it would be nice if there was an additional storage pocket outside of the case to store all of the accessories as I’m one who can never find the right cable when I need it and it would be nice to have all the accessories stored together. 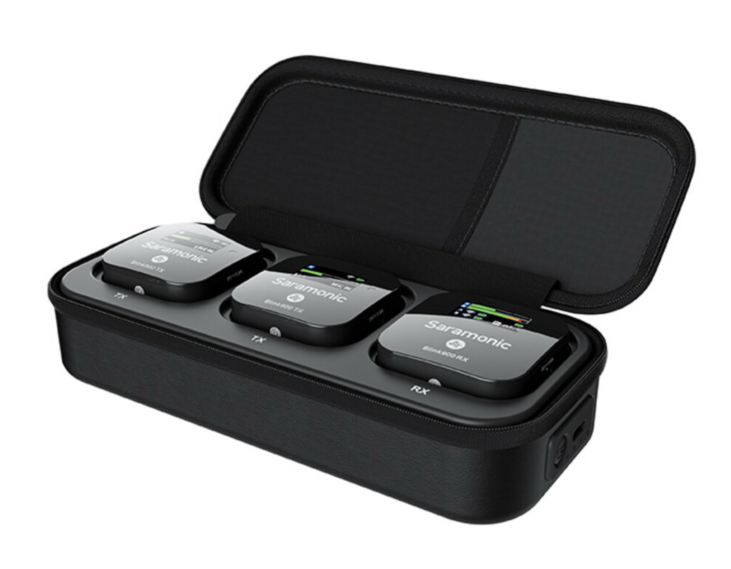 The Rode on the other hand offers up to seven hours of use between charges, but to recharge, each device needs to be connected to power separately.

When comparing what’s included with the Rode Wireless GO II to the Blink 900 B2 kit, you have to factor in that the Rode Wireless GO II does not include the two wired lavaliere microphones, a lightning cable for connection to an iPhone or a charging case. On an apples to apples basis, to get the same accessories and connectivity with the Rode as you get with the Saramonic Blink 900 B2, the price jumps up to more than $550 vs $399 for the Saramonic model.

To be fair, the Rode Wireless GO II does allow for onboard recording and that is a good fail safe should the signal get lost or garbled during recording. However, to use this feature, the Rode unit needs to connect to an app on your computer. Maybe if they incorporated a removable micro SD card for backup audio recording, I’d be more of a fan of this method of onboard recording.

The Saramonic Blink 900 B2 two channel wireless microphone system sells for $399 and includes everything in this image. I can honestly say that it’s easy to use, delivers good range and sound quality and the only thing missing when compared to some others is built-in recording. But, when used properly and at reasonable distances, it’s not a feature that’s super important to me as I see this as the ultimate in affordable two person interview microphones. Yes, I’m sure that others may disagree, but that’s my opinion.

The bottom line: I can highly recommend this product. While the Rode Wireless GO II models seem to deliver a bit longer range without breakup, to my ear the Blink 900’s sound quality is noticeably better. Add to that all the accessories that are bundled and I’ll put a buy rating on the Blink 900 B2. To me, it’s the best  value for two channel wireless microphones on the market today. As I’ve often said, Video is easy, audio is hard. This product makes capturing quality audio…easy. 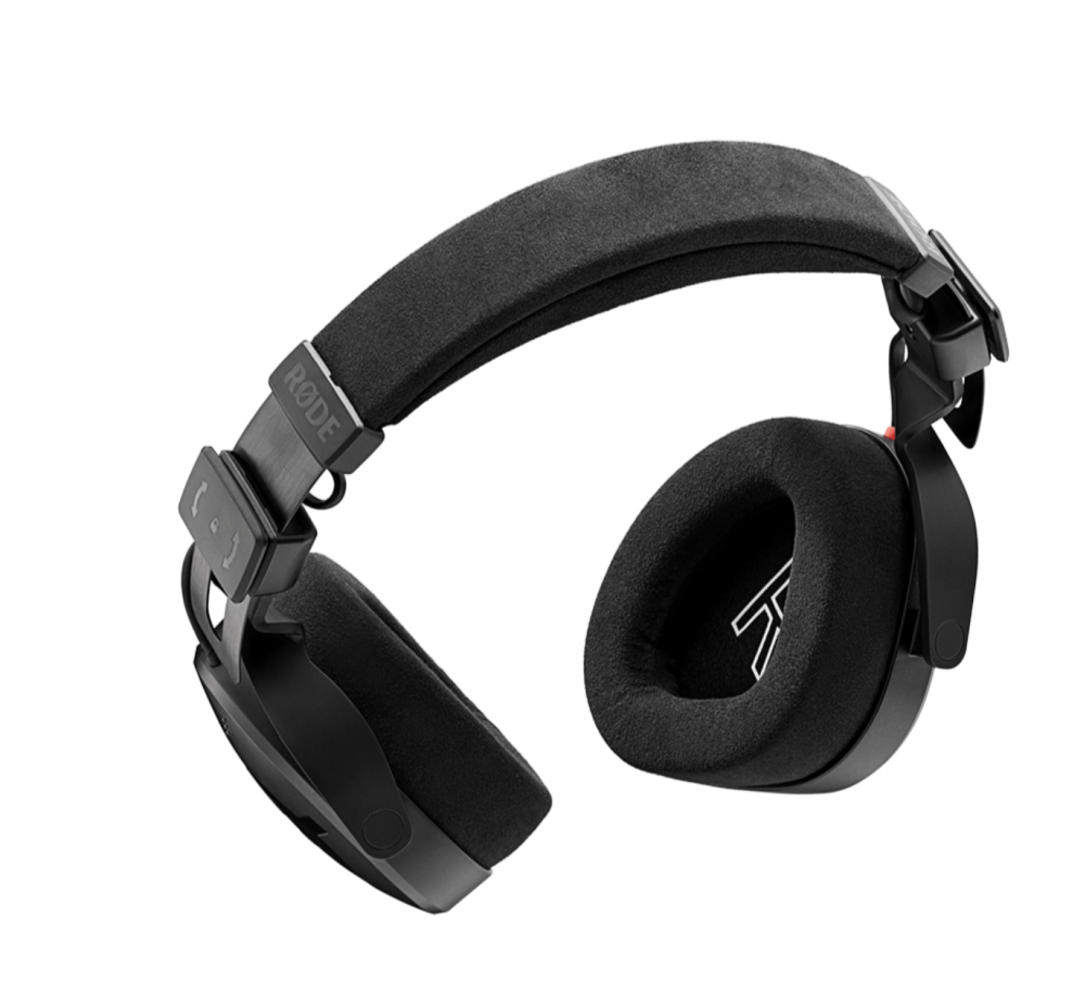 Now, if you think I’m picking on Rode…I’m not. It’s always been my job to seek out the best values in a specific sector and at this moment, I feel the Blink 900 B2 is a better buy for your dollar. I’ve enjoyed using Rode products in the past and just picked up their new headphones which I think are one of the best $150 headphones for monitoring audio I’ve used to date. They are comfortable, have nice features and deliver excellent sound quality.