The big question is: How does it sound? I’ll let you be the judge as this entire video was produced using this microphone system.

The big question is: How does it sound? I’ll let you be the judge as the entire video was produced using this microphone system. More details on this product and company appear below the video.

I’ll admit, I’m not sure what to call PicoGear’s new microphone system. Is it the PicoMic or the PicoStream? Based on an email exchange with the manufacturer, they are not too sure what to call it either! It appears the tiny transmitters (microphones) are named the PicoMic and the receiver is named the PicoStream. However, there’s no name designated for the bundle that contains both the receiver and two transmitters.

Nonetheless, this dual channel wireless microphone is one of the hottest 2.4GHz units on the market today. It’s so much in demand, that you need to check the manufacturer’s website daily to see if inventory has magically appeared in stock as they have no method of accepting backorders. Since I’m not privy to the numbers, either this $450 unit is selling quite well, or there’s simply not enough units rolling off the production line. 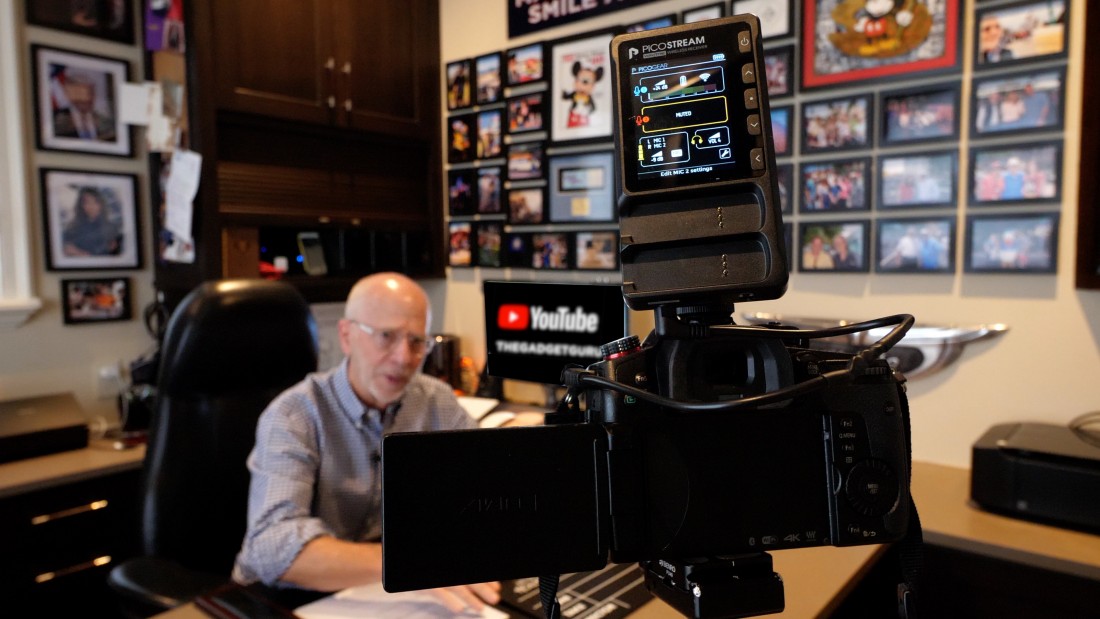 France based PicoGear is a newcomer to the wireless microphone scene and while the PicoStream unit, just like almost every other wireless microphone on the planet, is manufactured in China, I was a bit surprised when my order was filled and was shipped directly from Hong Kong. But, I can say that same about many of the Apple products that are also fulfilled directly from overseas production facilities.

Included in the box is a usable semi-hard carrying case along with the camera connection cable, a micro-USB charging cable and a screw-on cold shoe mount. Also included is a very brief (but pretty) quick start guide and the address how to access the online manual. A firmware update was available for my unit and was easy to install. However, in the few days I’ve owned the PicoStream unit, two additional firmware updates were made available, but I was not notified. For some odd reason, although they have my email address, I did not receive any notifications of this update and accidentally stumbled upon it online. It seems that PicoGear could come up with a solution for this dilemma and not rely on users to constantly check its website.

The PicoStream competes directly with 2.4GHz wireless microphone systems from Sennheiser, RODE and Saramonic. Like the $250 dual channel Saramonic Blink 500 system, up to two separate wireless microphones can attach to a single receiver. For anyone who’s setup a two-person interview, this is a very nice features as it keeps the wires to a minimum. The fewer the wires, the lower the chance of problems. The comparison to the Saramonic Blink 500 ends there as the PicoStream delivers many more features, but comes at nearly twice Saramonic’s $250 price for a dual channel wireless system. 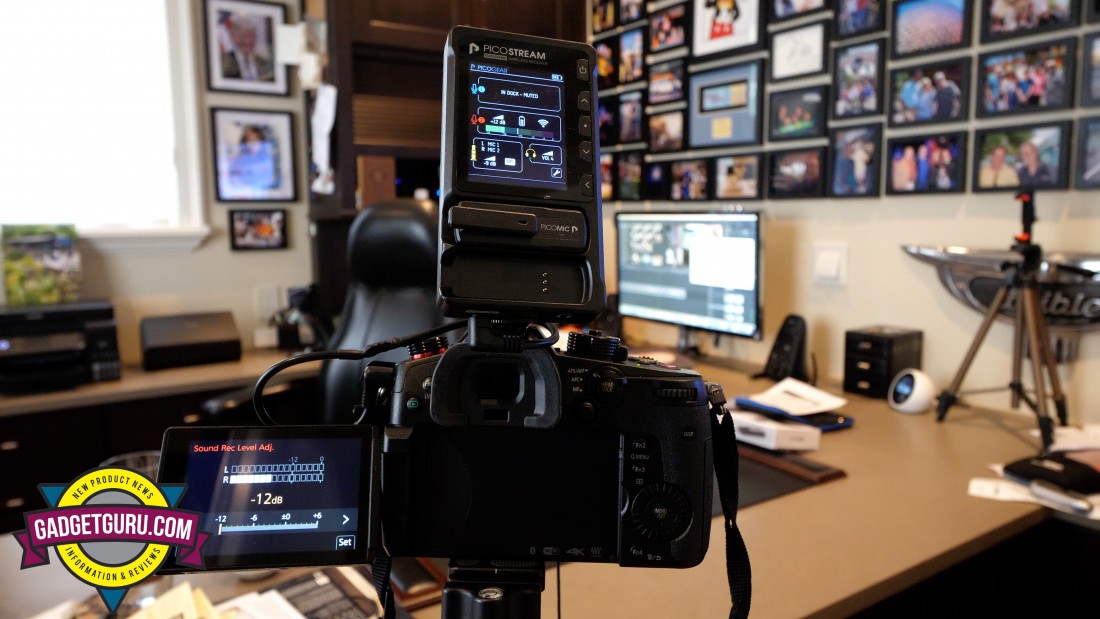 The PicoStream’s receiver can rest on a camera’s cold shoe mount and attaches with a single 3.5mm cable. In concept, the same cable can be used for attachment to a smartphone (lighting or USB-C cable required) or a DSLR. I say “in concept,” as the version I tested required a separate cable for connection to a DSLR. The unit I purchased (yes, I purchased it) is part of the second batch and it appears this product is in the midst of undergoing inline changes. The DSLR cable (-24dB attenuation cable) appears to have been handmade and was included in the shipping box and not in the main package with the other items. Unlike other wireless microphones in this space, the connection cable was flat and not coiled. It appears fragile and I can only hope an upgrade is coming soon. 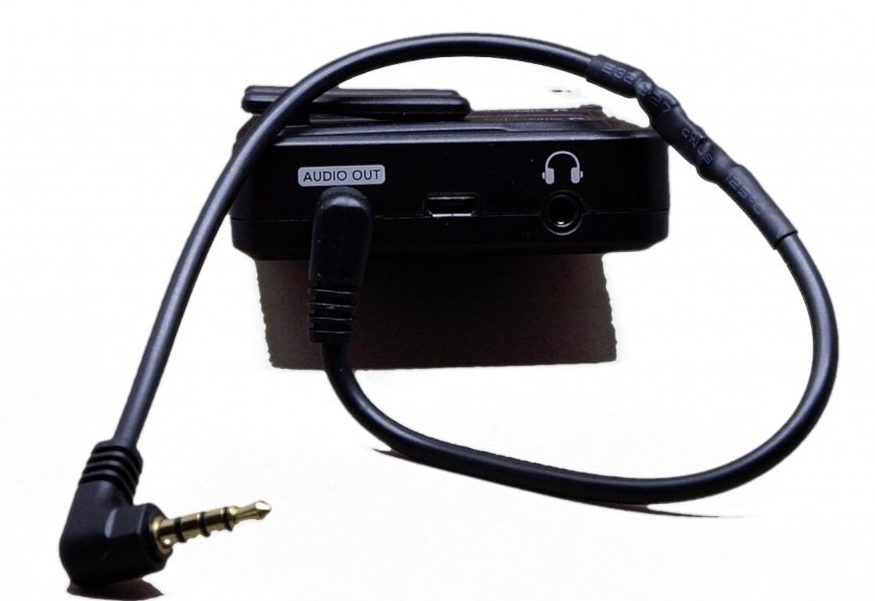 What makes the PicoStream unique is its two tiny PicoMics that magnetically nest within the receiver unit. This allows a single micro-USB cable to deliver charging to both the receiver and the two microphones. This is a very good thing as other dual channel wireless microphones can require three cables to accomplish the same thing. While these tiny mics are not the best sounding on the planet, they get the job done. However, if you take the time to fine tune the output and microphone levels, depending on the environment, the sound quality generated from the tiny PicoMics can be very good. But don’t expect to take the PicoStream straight from the box to a location shoot and experience good results as there’s quite a few settings that need to be fine tuned for the best results. This is both a good and a bad thing. 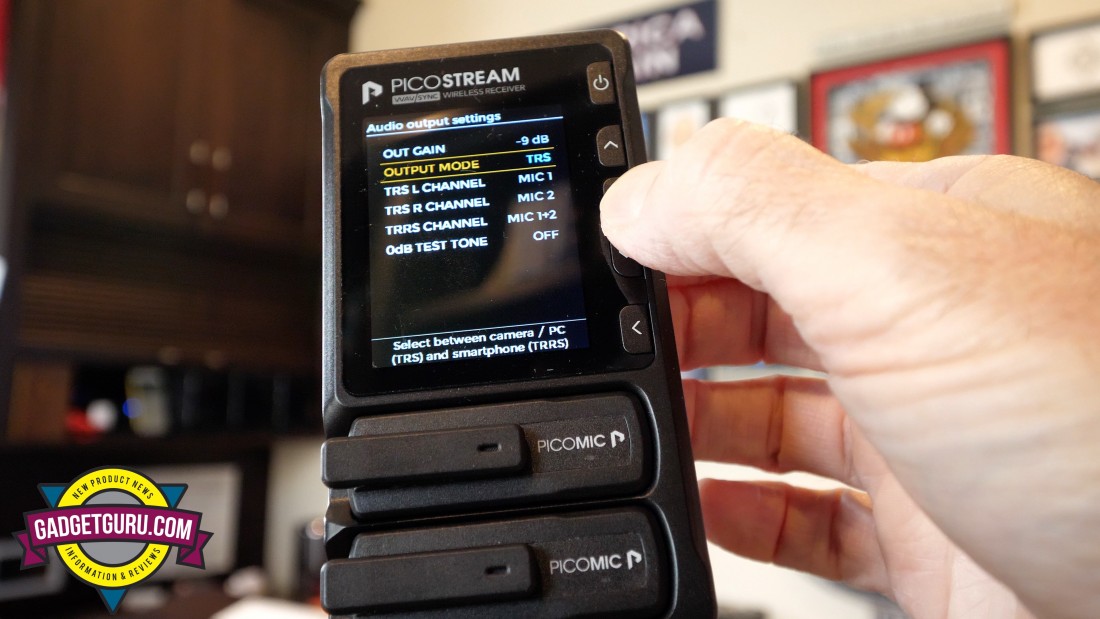 I say “good” thing as it delivers a very high level of customization as the built in pre-amp can be controlled to send the sound level to the camera while each microphone can have the similar adjustments. It’s easy-to-read, multi-function display allows for a high level of microphone customization that I found desirable and not available from other entrants in this field. For example, when used with a  DSLR, each microphone can be designated to go to the left or right channel or merged into a dual mono mode. This is a very good thing when you may be doing an interview and want to balance the sound based on the volume level of each subject.

I say “bad” thing as it takes time to get things right. Considering PicoGear can be considered a start-up company, they have work to do to make thing easier for the end user. It seems the simplest things they can do is to provide suggested level settings in the quick start guide for use with a camera phone or DSLR. While some settings are listed, others are not. This can be frustrating for the end user and result in poor quality audio. I found myself taking the better part of a day trying different combinations of output and mic volume and then trying the results on my editing program to find the right combination of settings. When I did find the proper adjustments, the resulting audio was admirable…especially from such tiny microphones.

PicoGear deserves kudos for creating a form factor that simply makes sense. This company is one to watch.

Here’s the settings that I found worked the best to deliver clear audio on either a Panasonic GH5/GH5S or iPhone:

Perhaps we’ve been spoiled by single channels wireless microphones such as the RODE Wireless Go that are simple to setup and use and deliver respectable results, but it seems that with a bit of explanation from the manufacturer, the initial setup could go easier for the end user. 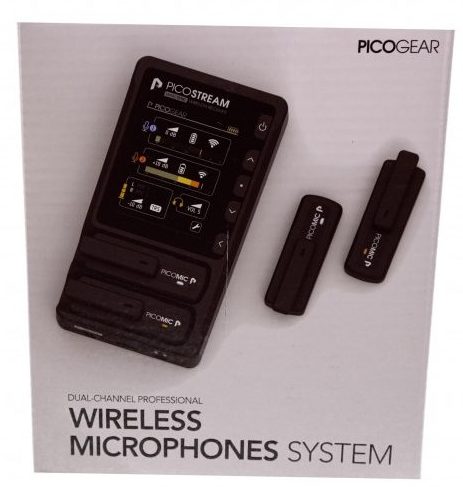 PicoGear bills this as a Professional wireless microphone system. I’m not sure I will go that far…but it’s not the the type of wireless microphone that I would recommend for a typical consumer. It’s not that it doesn’t work, it’s simply that it takes time to make sure the settings are correct and many consumers may not take the time time to fine tune it for a specific setting or environment.

As another example, does the typical consumer understand the difference between TRS and TRRS? (These are cable types that are specific for cameras or phones). While the instruction manual states to use the Auto mode and the receiver will automatically detect whether the connected device and adjust accordingly. Evidently in the first batch, the Auto setting was included, but was problematic. In the unit I received, while the online manual stated there was an Auto setting, it was absent.

In a perfect world, the multifunction display could hold the settings for popular cameras/phones and by scrolling through the menu, the settings could be a one-touch experience. Or, they could simply be listed on the manufacturer’s website.

Since phone support is not available, I’ll commend PicoGear for delivering rapid email replies to my questions. Most responses came within a couple of hours…even on weekends. But wouldn’t it have been nice if the online manual was updated? Since the card included in the package states “Browse our extensive online manual” along with a dedicated web address, it would have been easy to have an online page dedicated to models that included specific inline changes.

Back to the TRS/TRRS dilemma, it would be nice if those were changed to user-friendly names such as Camera or Phone? Yes, that would be too easy!

If you took the time to view the video (above) I went into quite a bit more detail and provide my opinion about the range of 2.4GHz wireless microphones. It seems the first thing that nearly every reviewer on the planet these days is to see how far these mics can carry a signal. Personally, 2.4GHz is not about range, it’s about ease of use and some reviewers are missing that point. For that reason I think the PicoStream/PicoMic has room for improvement, but with that said, it is noteworthy and it’s a good tool to carry in the camera bag. PicoGear deserves kudos for creating a form factor that simply makes sense. This company is one to watch.