I’ll cut to the chase and tell you that I’ve been using the $250 Saramonic Blink 500 dual channel 2.4GHz wireless system for a few weeks and I’m impressed. At the bottom of this post you’ll see a video where Siren and I explain why we like this system and provide a demonstration. (Watch on YouTube: https://youtu.be/1fuDaFB_usA)

NOTE: In the video I incorrectly stated the price of the single channel unit at $190. The correct price is $179. Here’s an Amazon link: https://amzn.to/2mYFVQl

However, what blew me away was that while I purchased two separate Blink 500 systems, one of them included a module that connects to a phone and I’ll say that it’s the easiest way of using two microphones with a phone that I’ve seen to date. 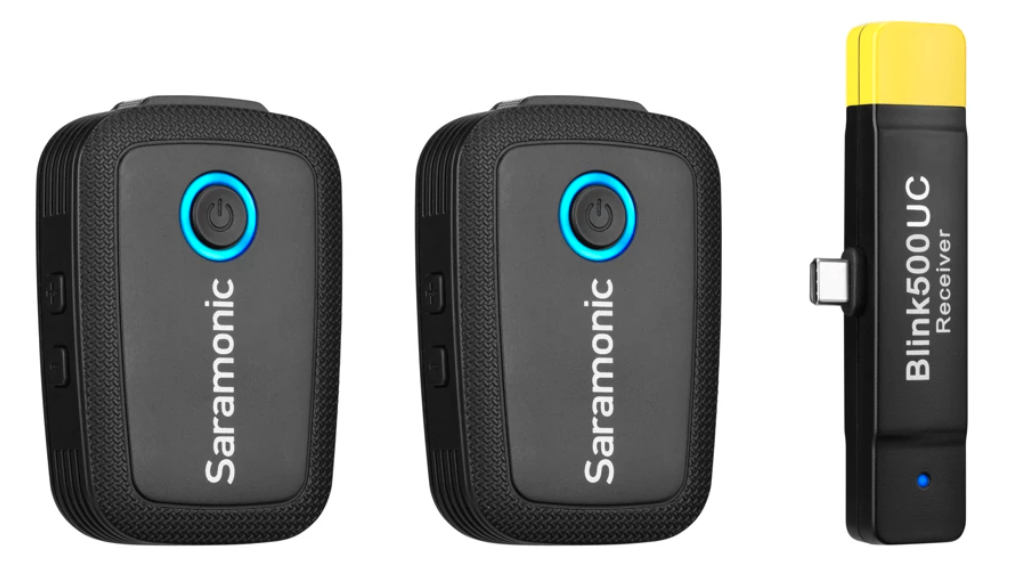 Until recently, I had never used a Saramonic product. While this company offers a wide range of wireless microphones and camera accessories at notably lower prices than established competitors, since it was an unknown entity to me, when it was time to add to my microphone collection, I chose to go with better known brand names such as Sennheiser, Sony, Azden and Rode.

My reasoning was simple and based on the fact that while it’s fairly easy to create quality video these days, producing two-person interview style videos that incorporate clear and crisp audio can be difficult. Having quality audio gear can make the difference between success and failure when producing a video. Let’s face it, how quickly do you change the page when the video has poor audio? Simply stated, having good sounding audio is as important as having clear video. I will say that based on my experience with the Blink 500 dual channel wireless microphone system, Saramonic is now on my radar and I’ll look forward to adding some of their other audio products to my microphone collection.

Other Wireless Microphones In My Bag 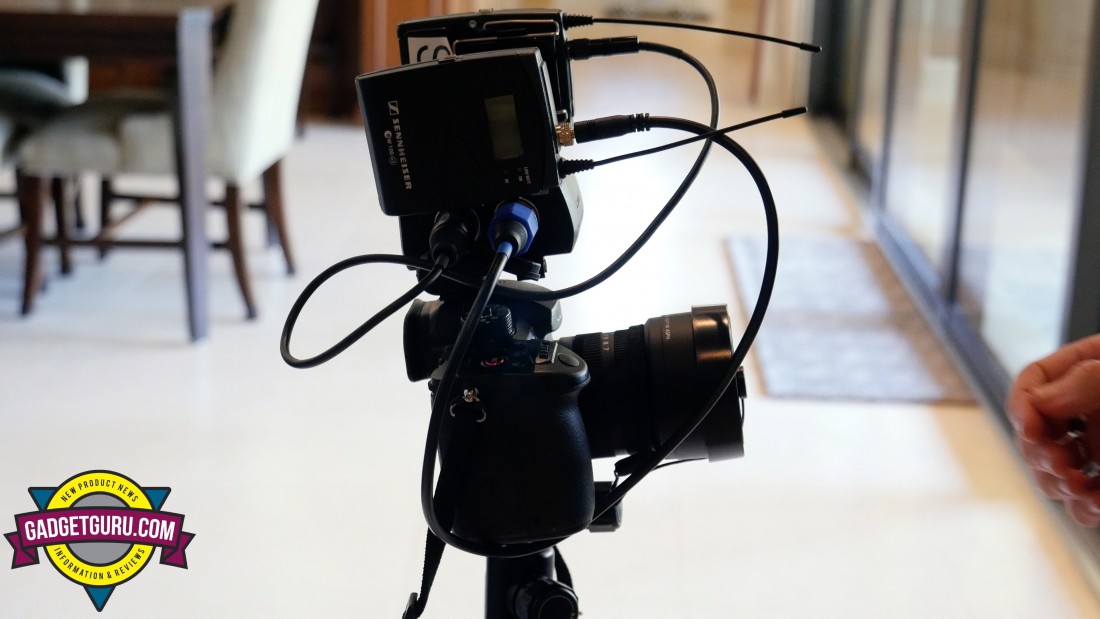 When conducting interviews, my go-to system has been Sennheiser’s EW series of wireless microphones. This system utilizes the 566MHz – 608MHz and can be considered the gold standard in wireless audio. When setup properly, the results are noteworthy. However, it’s expensive with a single person setup (one transmitter and one receiver) priced in the $600 range. This means a two-person interview will require $1,200 of equipment. As you can see in the photo above, depending on the camera used, it requires quite a few connections as well as the setup of various menus on the transmitter and receiver. The frequency used provides a strong signal in a variety of situations. While this is great for those willing to take the time to learn and utilize the menu items, for today’s breed of online bloggers, this system can be a bit complicated and expensive. https://amzn.to/2nwhLME 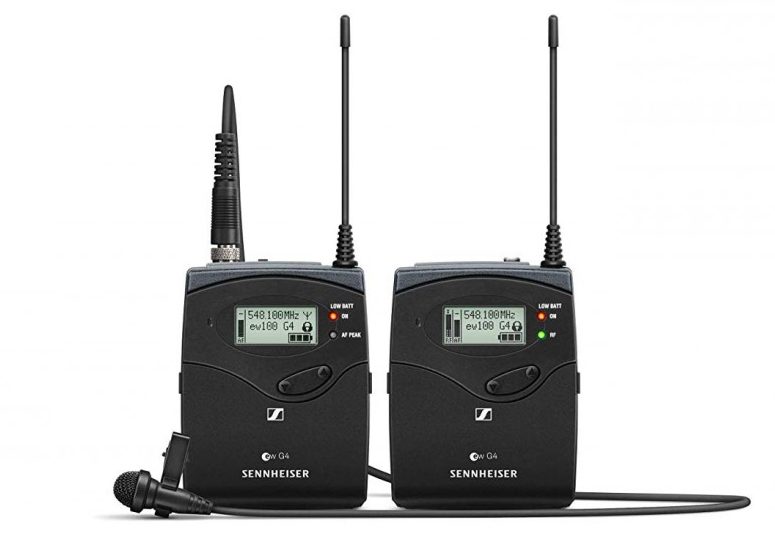 I’ll add that the few times I’ve contacted Sennheiser technical support, I’ve been disappointed with the response. I can only guess the tech reps are more attuned to dealing with professional operators than regular users such as you and I. 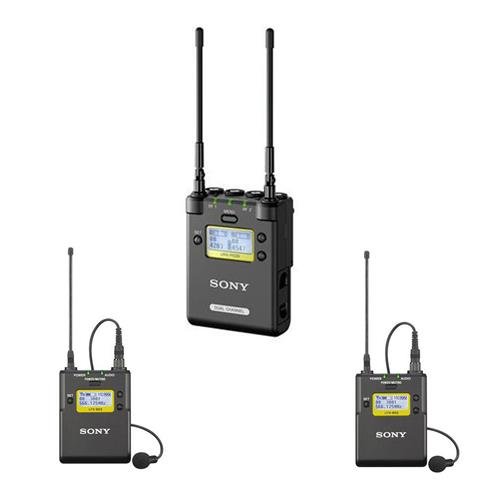 Sony offers a somewhat similar wireless audio system and offers a unit (URX-P03D) that incorporates dual receivers that connect to two separate body packs (microphone units). I’ve used this unit on a variety of occasions and while it’s somewhat expensive ($1,360 for the two channel system), it’s fairly easy to use. However, I was disappointed with the included lavalier microphones and quickly upgraded to different mics. Allow me to point out that while many of my lavalier microphones can be interchanged with various body packs, for some reason, Sony uses a proprietary connector that requires the use of Sony branded or Sony compatible microphones. This doesn’t surprise me as Sony seems to have always wanted to control its own ecosystem. https://amzn.to/2mAnpxn 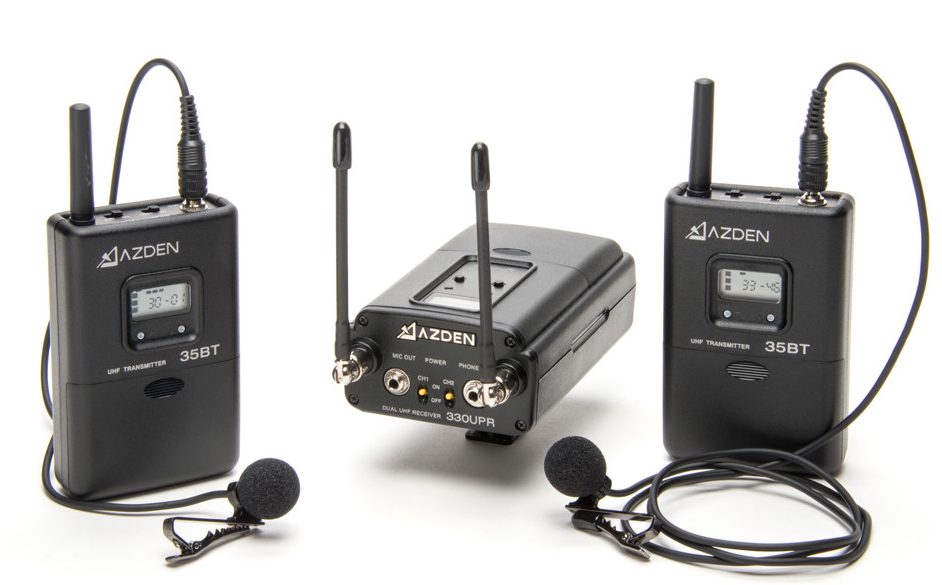 I also use an Azden 330LT dual channel wireless system and while it’s been reliable and has delivered what I considered to be excellent audio quality for two person interviews, it can be a bit confusing (at least to me) in selecting the best frequency for a specific location. Azden tech support has been excellent. $775. https://www.azdenproshop.com/product/330lt-2-channel-uhf-wireless-lavalier-system/

Today there’s a new breed of wireless microphone and instead of using UHF or MHz signals, it’s utilizing the 2.4GHz signals to connect the transmitter to the receiver. While I’m not an expert on signal schemes, I can say this is similar to what’s used for WiFi. These systems require relatively low power that result in four to six hours of usage per charge with the included USB-C cables. While they don’t have the range of the “professional” systems, they are more than ample for today’s breed of bloggers or those wanting to conduct basic two person interviews.

I’ve used 2.4GHz wireless microphones from Sennheiser and Rode and they have their pros and cons that I’ll save for a future report. What drew me to give the Saramonic Blink 500 system a try is it’s 2.4GHz two channel/dual microphone system that sells for $250. https://www.saramonicusa.com/collections/wireless-microphones/products/blink500b2 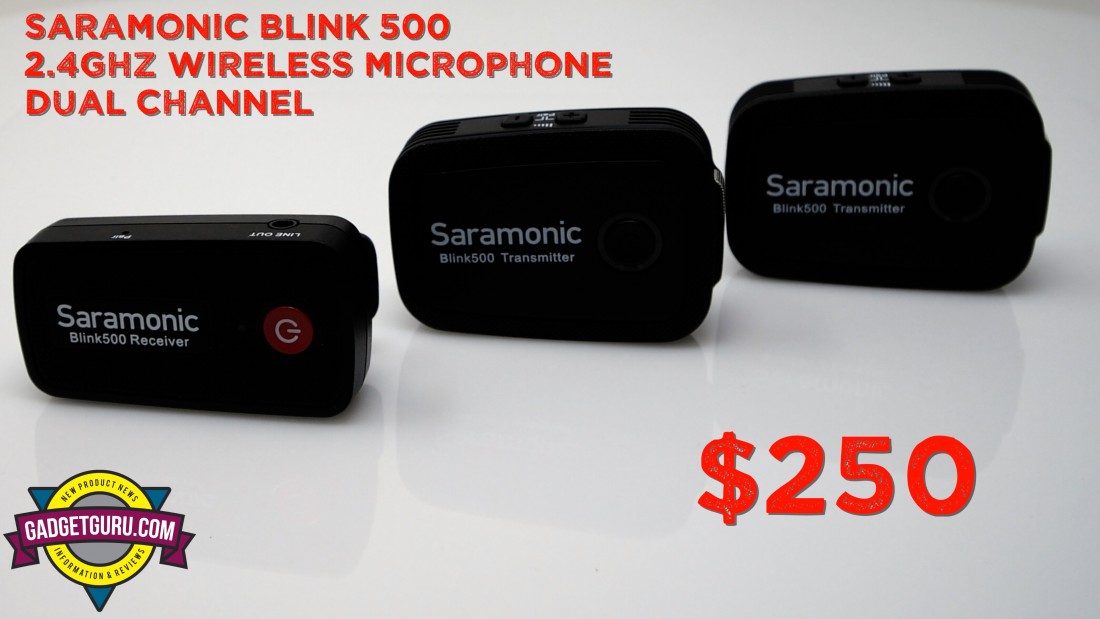 Whoa! $250 for a wireless dual microphone system? What’s the catch? What’s not included?

As you’ll see in the video below, this system includes every cable connector you need for connection to a DSLR or a phone. (Some phones may require a proprietary connector). While the transmitter modules have a built in microphone, also included are lavalier microphones that plug into each transmitter. 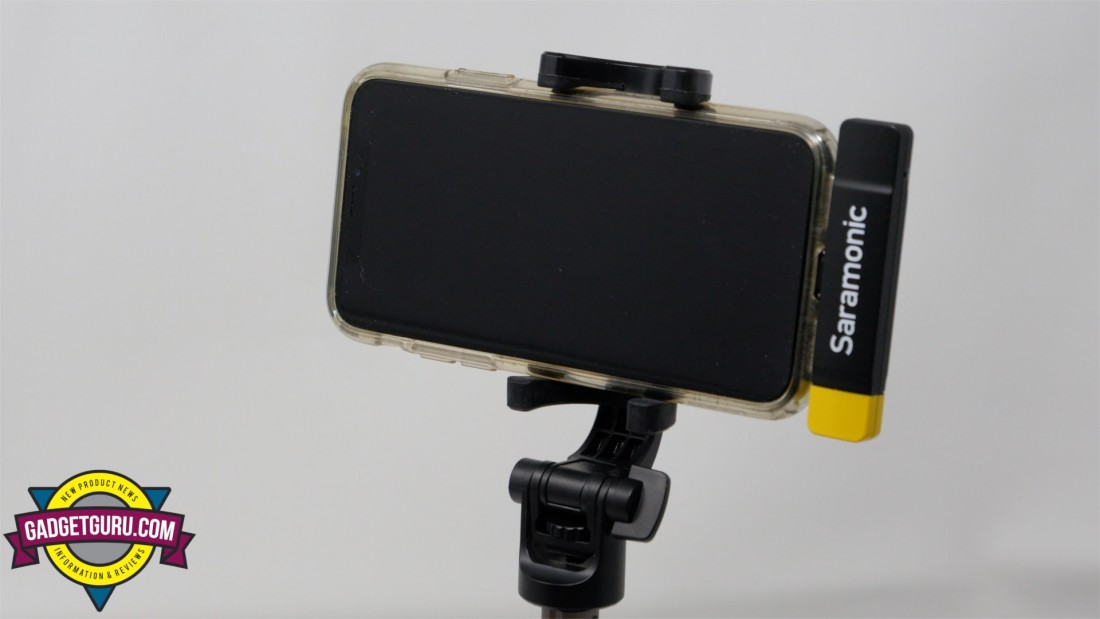 Saramonic just started shipping tiny modules that uses a Lighting or USB-C connectors that quickly attach to phones and connect wirelessly to either one or two transmitters for $280. Yes, I had to give this a try and you’ll see the review and demonstration in this video. https://www.saramonicusa.com/collections/smartphone-audio/products/blink500b6