If rule number one of Marketing 101 is to separate yourself from the competition, Entegra’s 2017 Cornerstone has earned an edge over others as it incorporates desirable safety and convenience features not found on competing models. 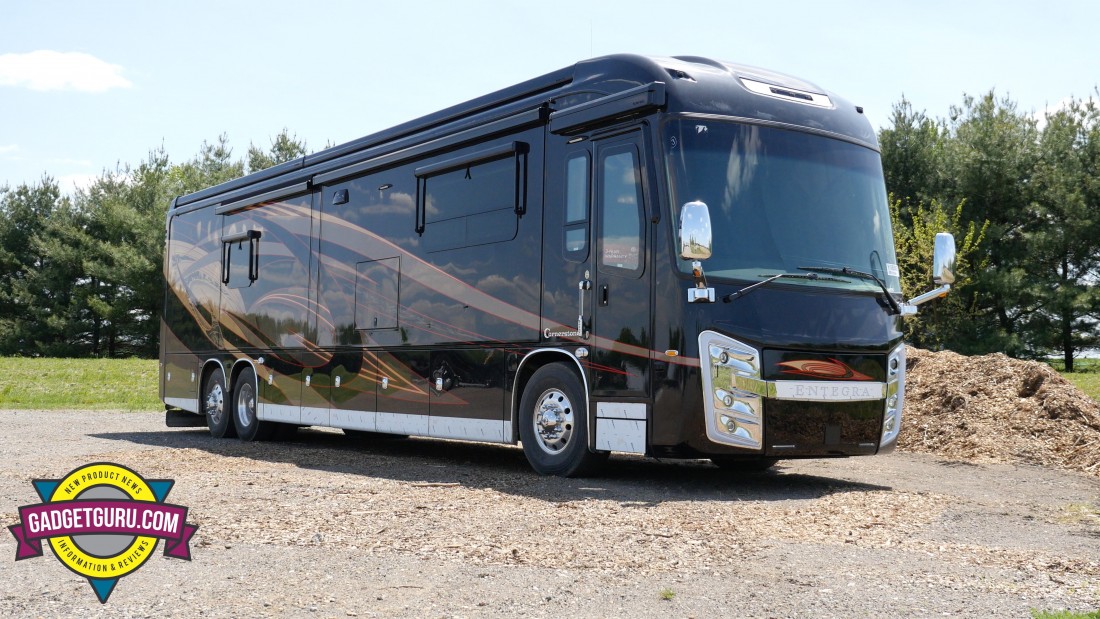 Just reading previous model Cornerstone reviews and watching various dealer walk-through videos, the 2017 Cornerstone captured my attention so much, I wanted to know more. So, I contacted Entegra management and made arrangements to fly to Entegra headquarters in South Bend, Indiana and then drive to Entegra Coach headquarters in Middlebury to tour the facilities, meet the people behind the brand and experience a 2017 model first hand with a test drive. I’ll take a moment to thank Entegra’s Public Relations department as they were kind enough to accommodate my request for access in a timely and courteous manner.

No payment or reimbursement of any form was made to me for this trip or for my coverage. This is typical of my methods as I prefer experiencing new products first hand and hearing about marketing strategies straight from the source in a non-rushed environment and not under the hustle and bustle of crowded and noisy trade shows or events. As you’ll see in future posts, Entegra provided me an all-access pass to discuss various aspects of its company and products. They do have a very good story to tell and have made great strides in their relatively brief eight year history. 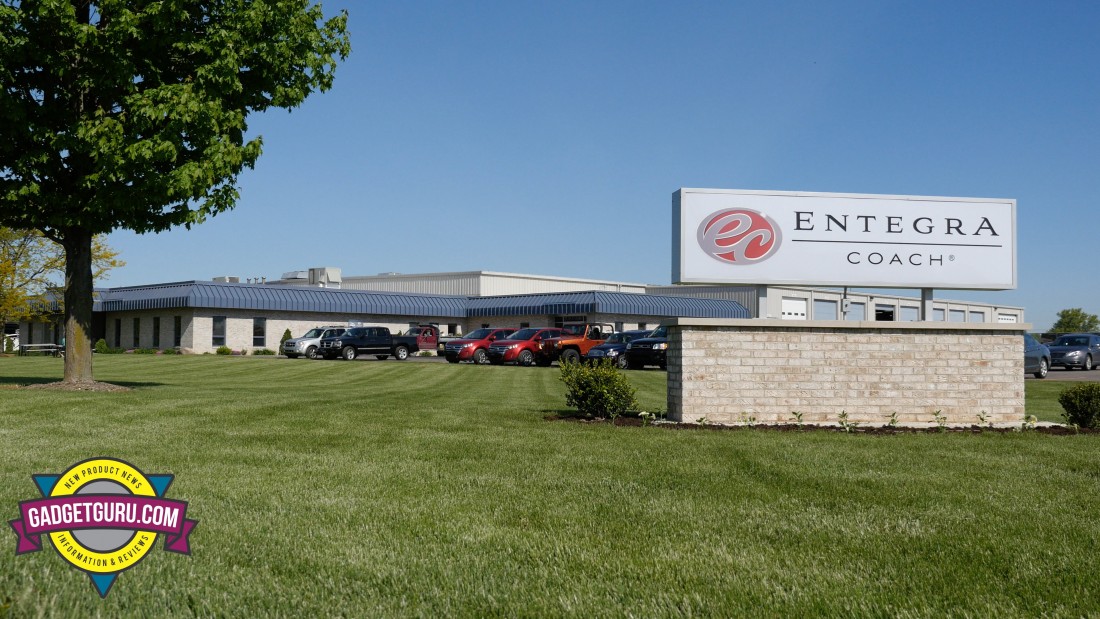 While I’ll provide the details of these new features in a moment, I produced a hands-on video demonstration of both its En-Telligent Collision Mitigation and Blind Spot Monitoring systems that appears below the commentary portion of this post. As with all of my topics of coverage, I attempt to be fair in my assessments.

From a standpoint based solely on driver visibility and the proper implementation of user-friendly technology, Entegra’s 2017 Cornerstone has raised the bar for mid-level luxury motorhome manufacturers…even when compared to models that demand a higher price point. The inclusion of noteworthy features makes the Cornerstone a strong value proposition to a potential buyer. I’ll cut to the chase and provide the bottom line upfront:

If you’re shopping for a new motorhome in this category, Entegra’s implementation of its En-Telligent Collision Mitigation and Blind Spot Monitoring systems combined with its Cab Forward design, slim A-pillars, enhanced driver visibility and low mounted mirrors, should provide ample motivation for the new motorhome shopper to give the Cornerstone a strong look.

I’ll also state that if one of the five floor plans and furniture offerings suit your needs, purchasing this coach is the definition of a no brainer. I make this statement as unlike other coach manufacturers, Entegra does not offer much in the way of customization. (Note: All currently available floor plans are pictured at the bottom of this post).

While there are choices, they are limited to pre-selected groupings of interior finishes and materials, plus a short list of options. This is the polar opposite of what I experienced when attempting to build a Newell coach, as in that case, there were simply too many options for a newbie to the motorhome world to comprehend.

Entegra coaches include a two-year warranty and while I’m not sure of the exclusions other than wear items, it’s managed by a solid company with vibrant management that seems to operate within a structured and organized environment. The only decision you’ll need to make is finding a dealer that is tailored to suit your future needs. 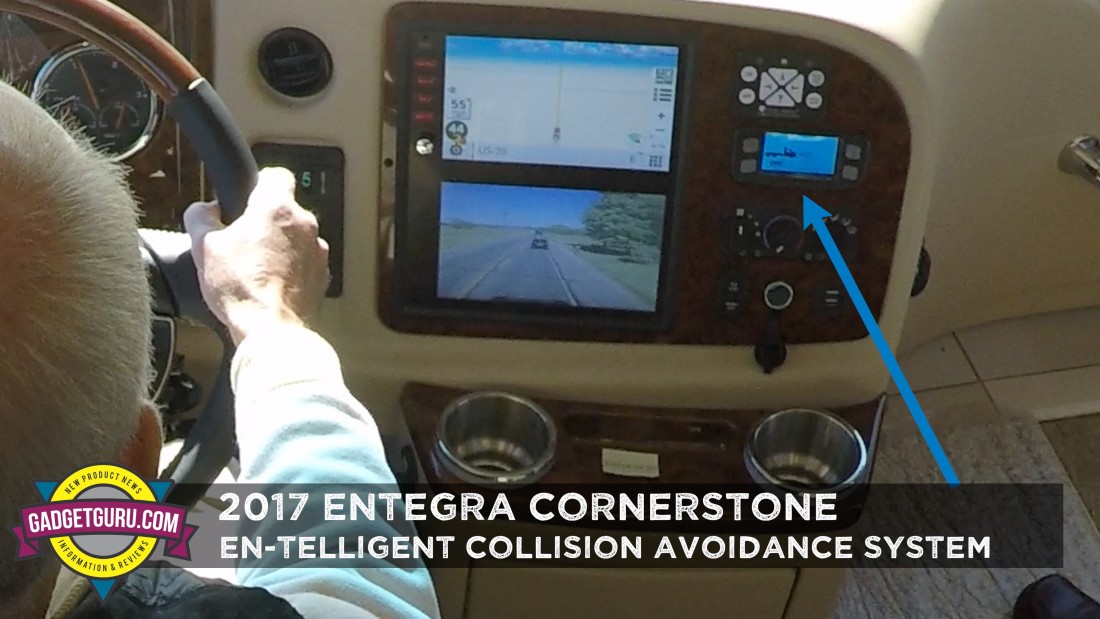 Entegra’s 2017 Cornerstone incorporates a fully-functional adaptive cruise control and an effective blind spot monitoring systems that are exclusive to this flagship model. Considering this relatively young company is still in the midst of earning a reputation for value and, as I like to call it, “bang for the buck,” it surprises me that seasoned motorhome manufactures have yet to figure out how to combine available automotive technologies and incorporate them into a motorhome. The manufacturers that do offer a method of enhanced cruise control, in this reviewer’s opinion, don’t seem to be doing it correctly. Simply stated, when it comes to these new tech/safety features, Entegra’s implementation, while not perfect, is way ahead of the pack and is setting the standard for other manufactures. 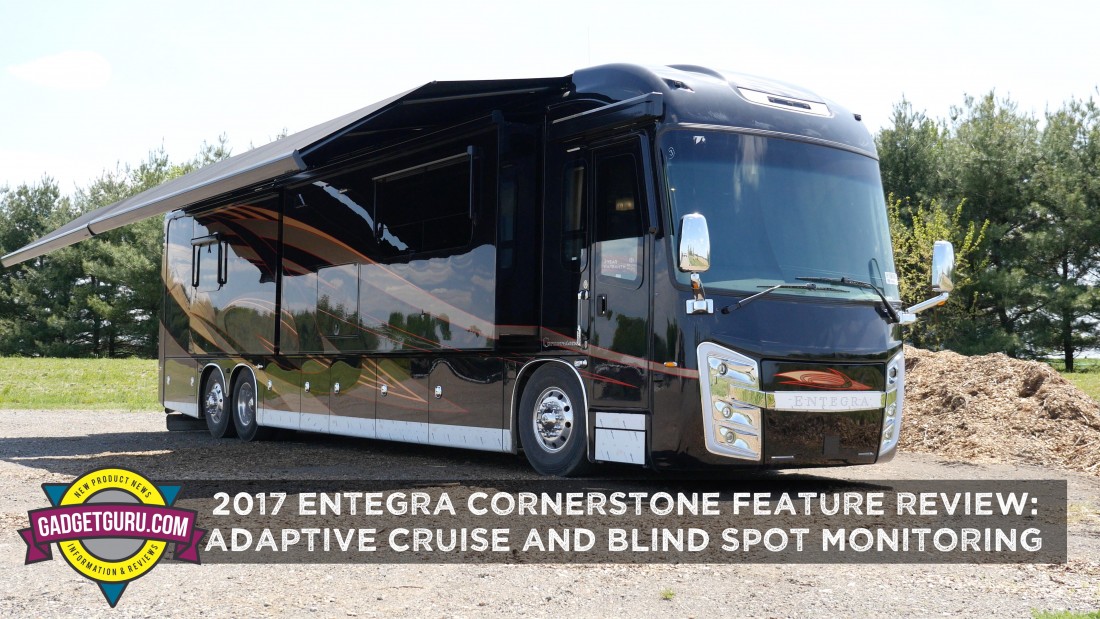 The first feature that caught my attention is what Entegra has named its En-Telligent Collision Avoidance System. This is best compared to the adaptive cruise control systems found in numerous automobiles. 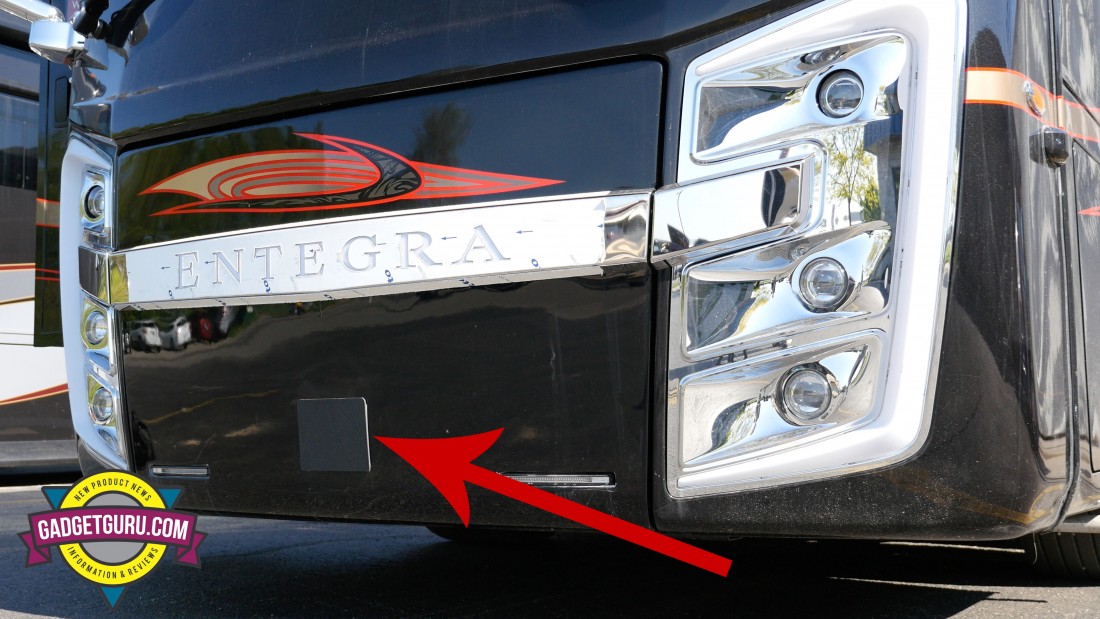 Similar to automotive versions, Entegra’s En-Telligent Collision Avoidance System utilizes front mounted radar sensors hidden behind a transparent and protective plate that perform instant calculations that judge the distance between the motorhome and other vehicles in its path. When the cruise control is activated, it allows the coach to automatically monitor forward traffic and when needed, activate the brake. Entegra’s system is unique to somewhat similar offerings as it combines adaptive cruise with collision warning, collision mitigation and electronic stability control. The best part is that’s it’s implemented in a transparent method and is a simple process to use. Just activate the cruise control and set your speed. That’s it.

While Entegra is not the first coach manufacturer to incorporate an adaptive cruise control system into a motorhome, from what I’ve experienced to date, its system is far more advanced than others. That’s because it utilizes true braking to slow or stop the motorhome.

The other systems I’ve seen to date have the ability to judge the forward distance and speed characteristics in relation to other vehicles in its path. But they simply “let off” the accelerator when the motorhome’s ability to maintain the set speed becomes obstructed. Other systems that I’m aware of don’t incorporate the ability to brake the motorhome, only slow it down. That’s because instead of using the coach brakes, depending on how that specific coach is equipped, they utilize engine braking or a transmission retarder to only slow the vehicle…driver intervention is required if a collision is imminent. While this method is useful in fighting fatigue when driving in a caravan or trailing a car or truck on the highway, it’s not effective if you need to slow at a quicker pace than the engine brake or retarder allows. Entegra’s solution is different and works like this:

The driver simply activates the cruise control with a touch of a steering wheel mounted button and sets the desired speed. This instructs the En-Telligent cruise control to maintain a distance that is equivalent to a 3.6 second reaction time buffer to the vehicle in front of the Cornerstone. Slower speeds will position the coach closer to the vehicle in front and faster speeds increase this buffer distance. Its algorithm is designed to allow for ample distance should automatic or manual panic braking be required. Should another vehicle encroach in your forward path, En-Telligent cruise releases the accelerator and activates the engine brake. If that’s not sufficient to maintain the buffer distance, the coach brakes are automatically activated until the proper buffer distance is created or a stop is achieved.

During my recent visit to Newell Coach in Miami, OK, I was told that due to the sheer size and weight of a motorhome, the technology to bring automotive adaptive cruise systems that actually brake the vehicle to large motor coaches simply weren’t available. I guess that they underestimated their much lower priced competition in this regard.

The other feature that captured my attention is Entegra’s En-Telligent Blind Spot Monitoring System.

This feature, in a similar fashion to what’s found in many cars, utilizes radar sensors mounted in four exterior locations to monitor the sides of the coach and alert the driver, through a series of illuminated LEDs, that another vehicle is currently located near the sides of the motorhome. 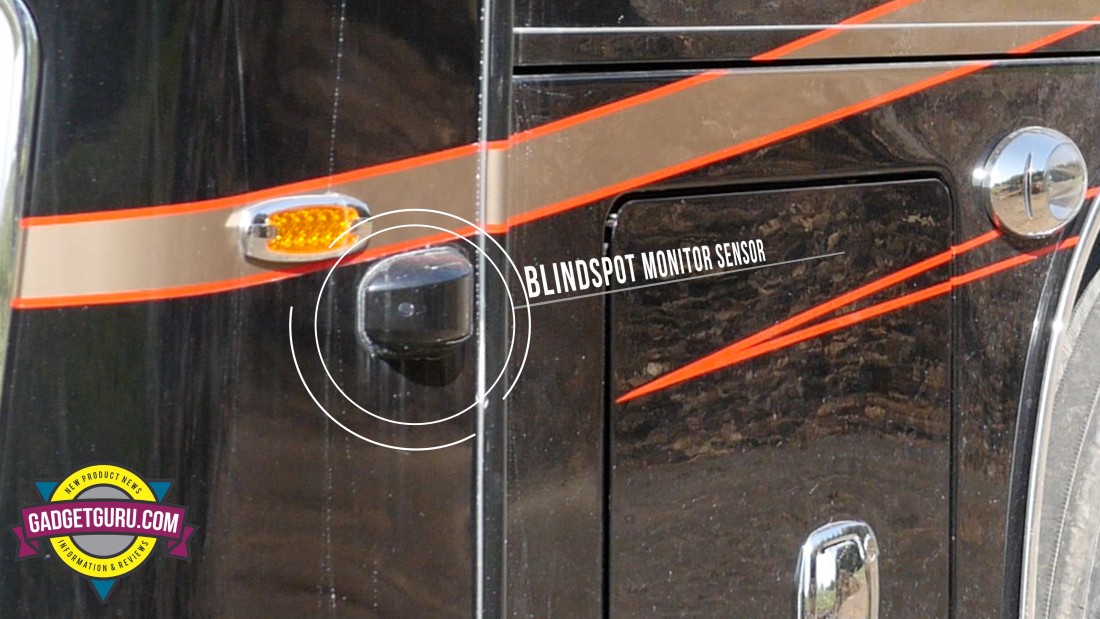 Like many cars, the driver alerts are located in the glass area of each side mirror and a quick glance shows a lamp that signals a vehicle could be located in a blind spot. It can detect vehicles such as motorcycles that may not be visible in the mirrors. 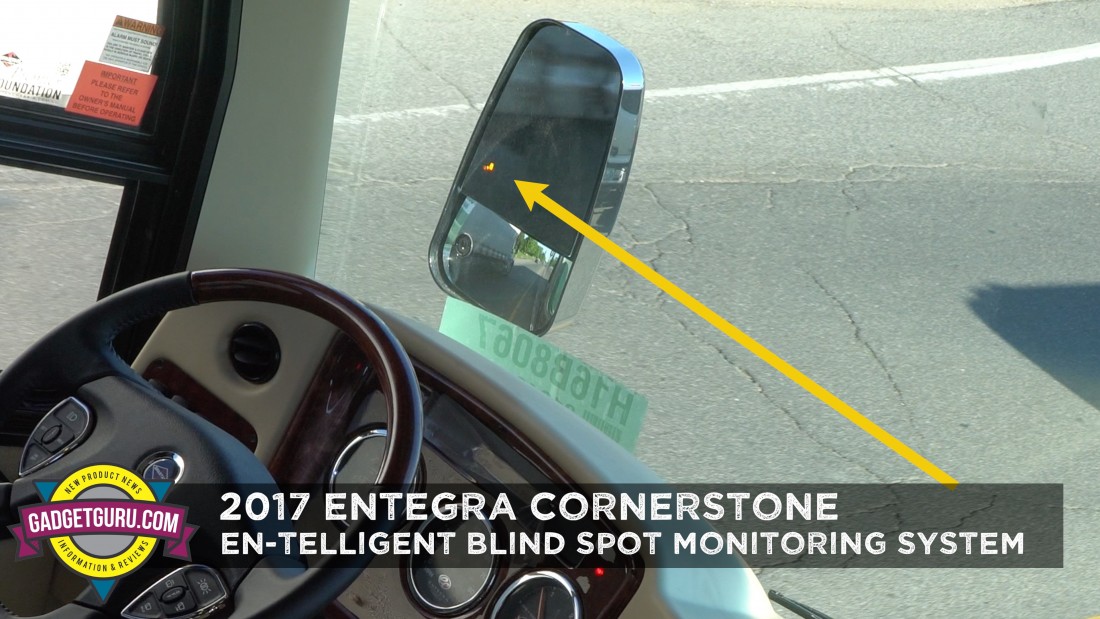 Redundant red LEDs are located on each side the dash. I found this feature to work as promised and combined with Entegra’s Cab Forward design and lower side mirrors and slim A-pillars, allows this coach to deliver a very high level of visibility. 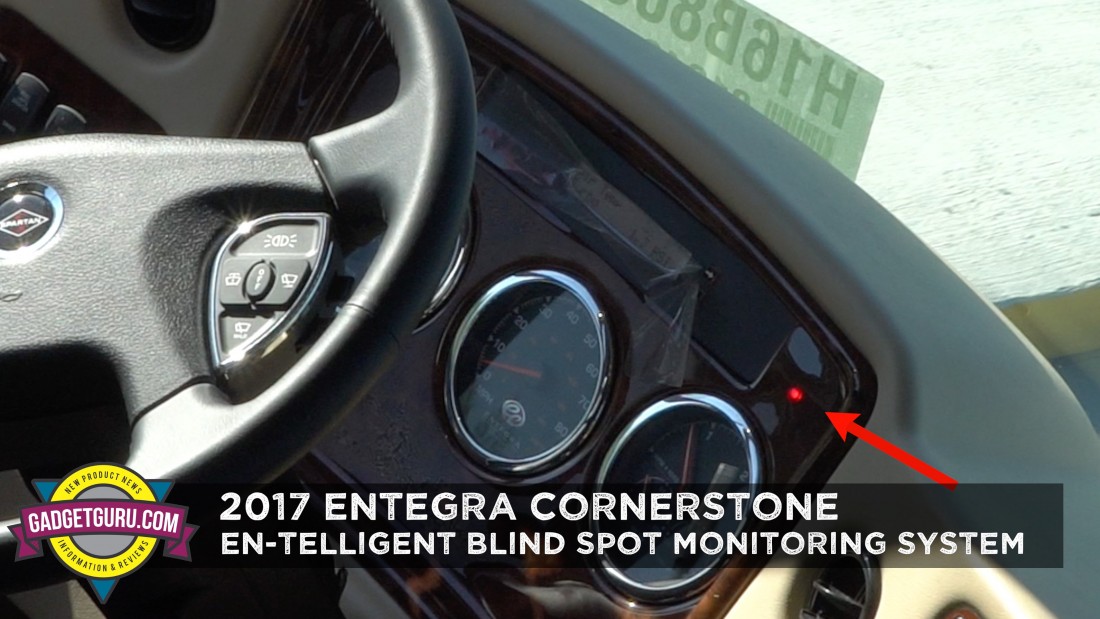 In the video located below, you’ll see some behind the wheel footage of both of these feature in action and hear the commentary by Brian LaPray, an Entegra Regional Sales Manager who was my host for this demonstration and driving experience.

During the adaptive cruise control demonstration, I was able to feel the automatic braking kick-in on multiple occasions. I learned that depending on the situation, the braking can be smooth and it can also be abrupt. I’ll advise that when the En-Telligent Cruise is activated, as with anytime the coach is under way, passengers should remain buckled in their seats as outside elements may cause the coach to brake at a stronger force than expected. While it’s not perfect, it’s as good as it gets in today’s motorhomes.

As you’ll see in the video, LaPray only started holding the side rail after an abrupt automatic braking experience. I’ll state that subsequent automatic slow-downs where the brakes were applied were much smoother. 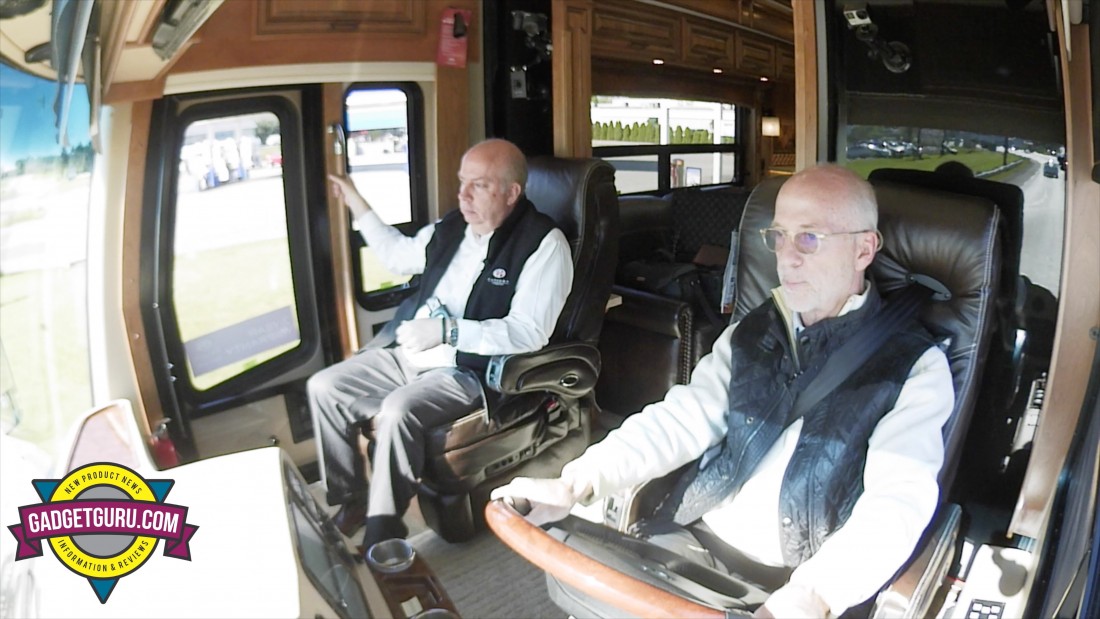 While my testing of of these features was limited, I can state both were shown to be effective and not just marketing gimmicks. These features, combined with the enhanced visibility of Entegra Coach’s cab forward design and low mirror placement has made this coach move upwards on my short list of brands to consider for my personal purchase. If I can find a workable floor plan and a dealer that has the capacity and product knowlege to provide a positive future service experience, a Cornerstone could be in my future. The En-Telligent systems and visibility features are noteworthy and provide a true glimpse into the minds of the people making the decisions inside the offices of this eight year old brand. I can only wish that Entegra jumps on the ComfortSteer bandwagon and includes this noteworthy feature on future models. I asked this question and it seems this feature is not on the drawing board at this time. But, we can dream! 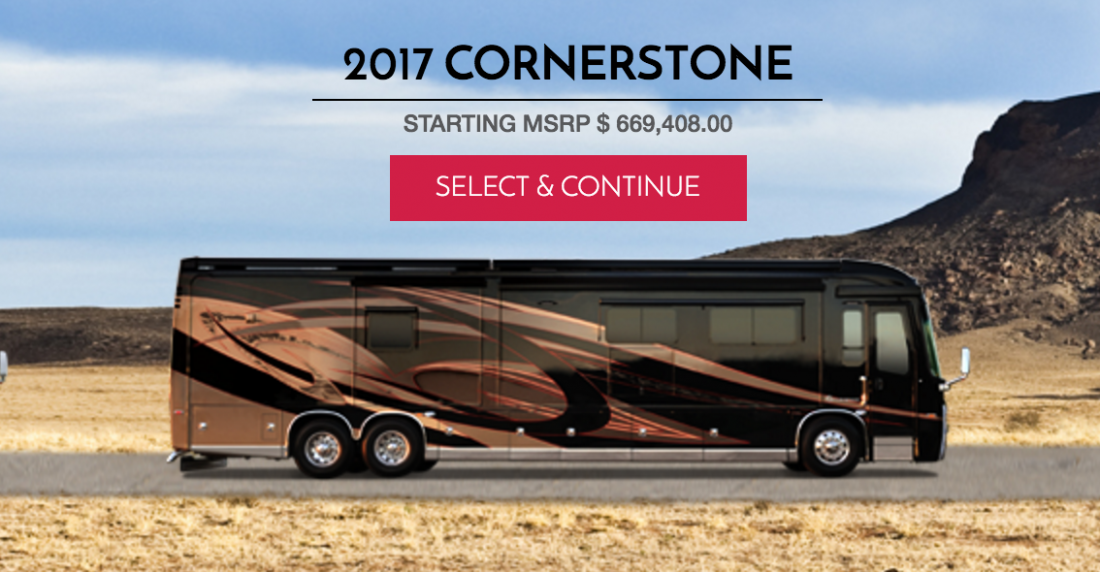 The question that remains is price. While the base Cornerstone carries a manufacturers suggested retail price (MSRP) of $670K, it’s common knowledge this number is simply a “suggestion” and the only way to figure out the “real” price is to visit a dealer, be prepared to buy and have a check in hand. I can only guess by judging industry standard discounts, the purchase price of a new Cornerstone is somewhere in the mid-to high $400K range. I’ll also guess the price a new buyer pays is based on market conditions, seasonality and the desire for a dealer to make a deal at that moment. But, don’t blame the pricing confusion on Entegra, as for whatever reason, this is a problem that’s universal among the RV industry.

While that’s a topic for another day, let’s get to the video demo and don’t forget to leave your comments below, on my YouTube or Facebook pages or on your favorite motorhome forum.

From my seat, I like what I’m seeing and Entegra Coach is presenting a bright future for mid-level luxury motorhome owners.

Simply stated, the Cornerstone is a contender. 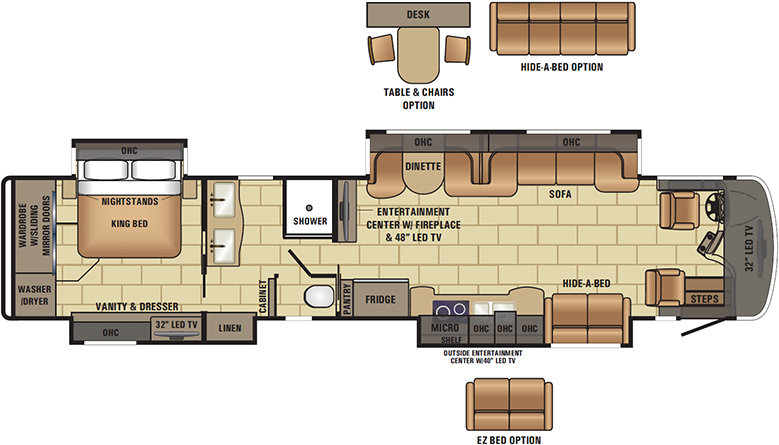 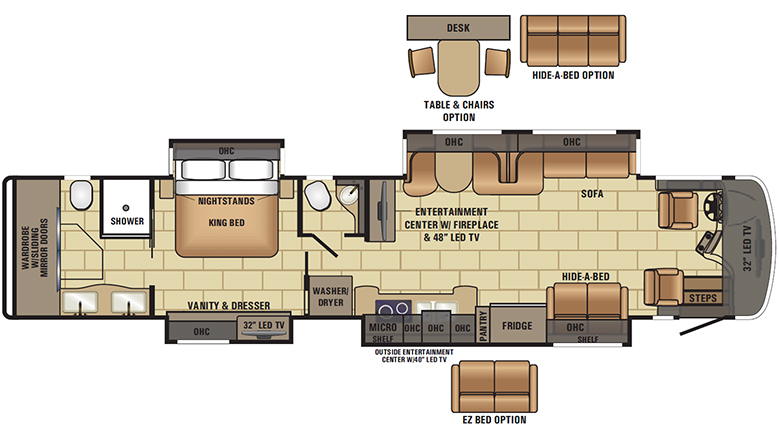