Yes, the rumors are true, I finally purchased a full-size luxury motorcoach!

After nearly 18 months of research, countless encounters with motorhome salespeople, multiple trips to various motorhome factories around the USA, numerous test drives and kicking a heck of a lot of tires, I finally found the right coach for my future traveling needs. Before I tell you more about this coach, allow me to answer the one question regular readers and viewers will probably ask:

Yes, I’m keeping the 1957 Flxible Starliner! And, I guess it’s appropriate for me to say that I now have a fleet of busses. Yes, it’s a small fleet, but it’s still a fleet! And in many ways I have the best of both worlds.

After all, the Starliner has achieved legendary status as it’s the first bus to win a Concours d’Elegance major award. Simply stated, I’ll maintain my role as the guardian of this vintage bus and will look forward to continue to drive and maintain this classic. On a related note, I’ve never driven a vehicle that makes everyone, including myself, smile as it’s a blast to drive. In fact, this soon to be 60 year old bus drives and rides smoother and more confidently that many of the newer, comparably sized Class A models I test drove during my search. So yes, the Flxible Starliner is a keeper.

And The Winner Is…

After so much time spent shopping and evaluating luxury motorcoaches and Class A RVs, which one did I go with? The answer is: A gently pre-owned 2014 Marathon Coach Prevost conversion. 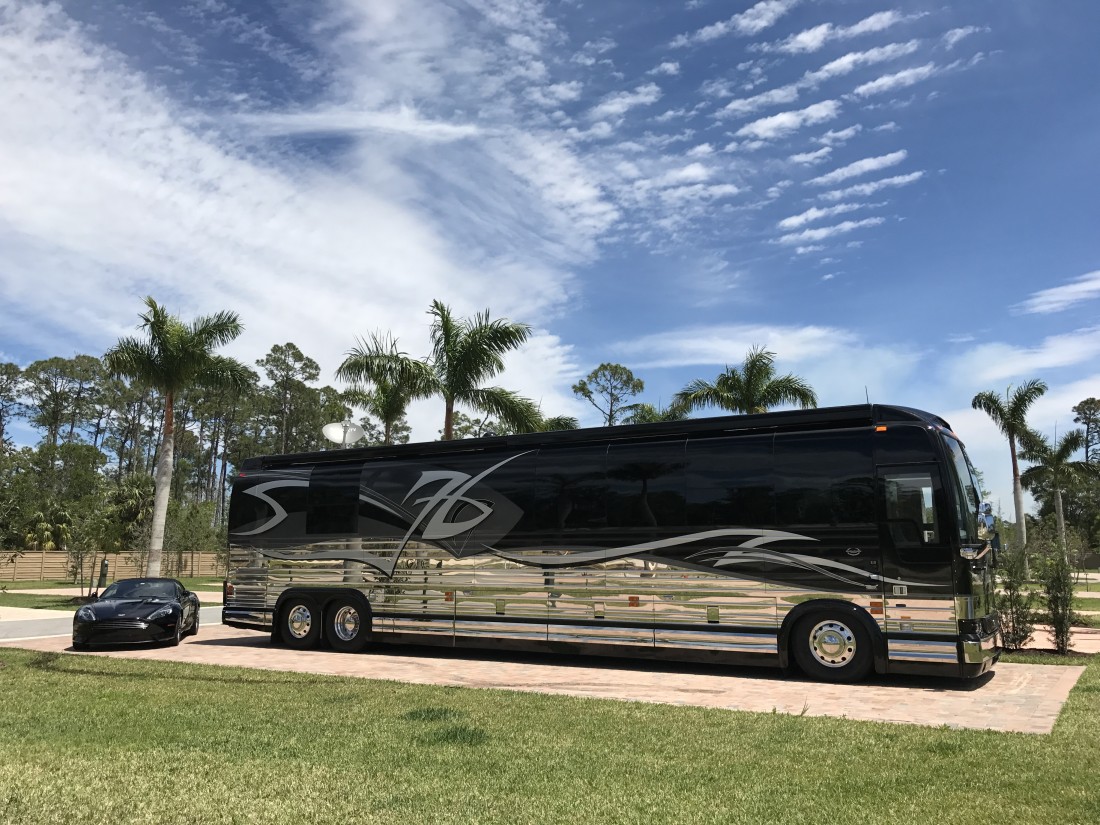 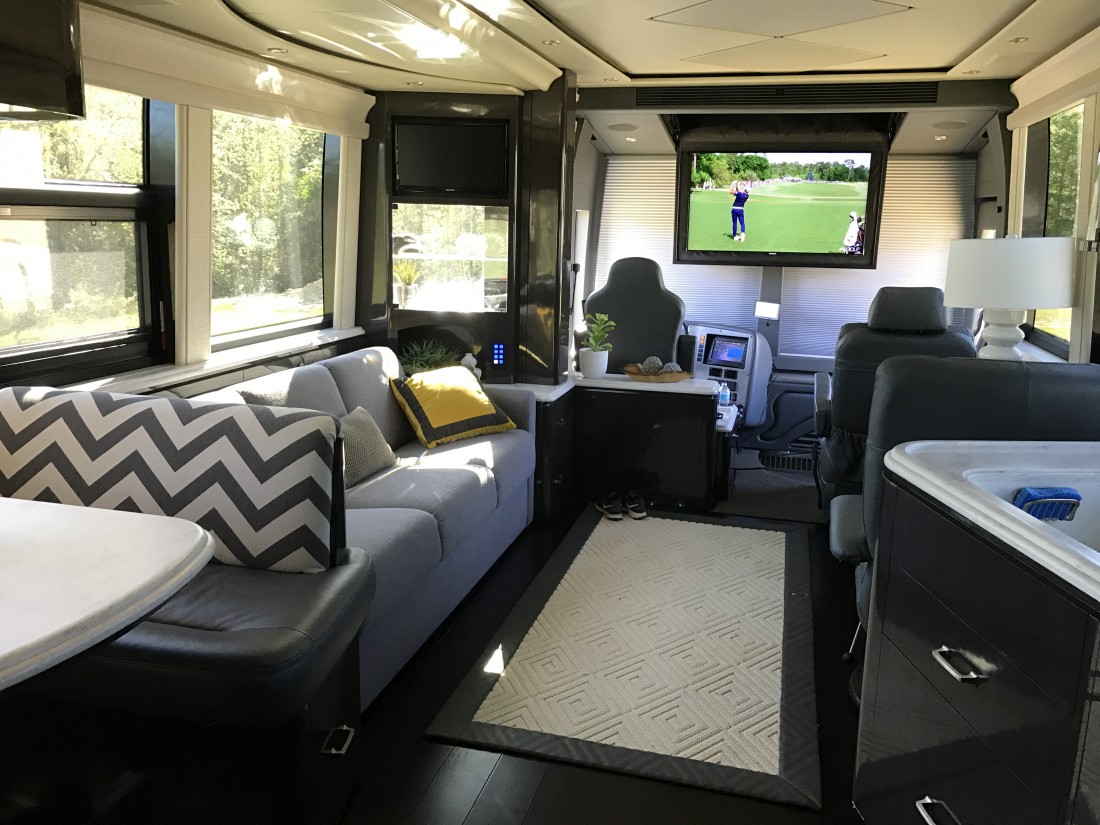 In the near future I hope to produce a video tour of this bus, but until then, I’ll state I purchased this bus with 40,000 miles on the odometer (barely broken in) and it was previously owned by an NFL player. It’s a bunk floorpan and as you can tell by the photo above, it was designed with top quality materials and finishes. No expense was spared in the design of this coach and I’m proud to be the new owner.

While I’ll surely have much more to say on this topic in future posts, the simple answer is: The availability of service. With six factory service centers scattered across the USA and four in Canada, it’s comforting to know that if chassis, engine or transmission service is needed or it’s time for scheduled or time-sensitive maintenance, I’m assured to know that support and service is a phone call and relatively short drive away. 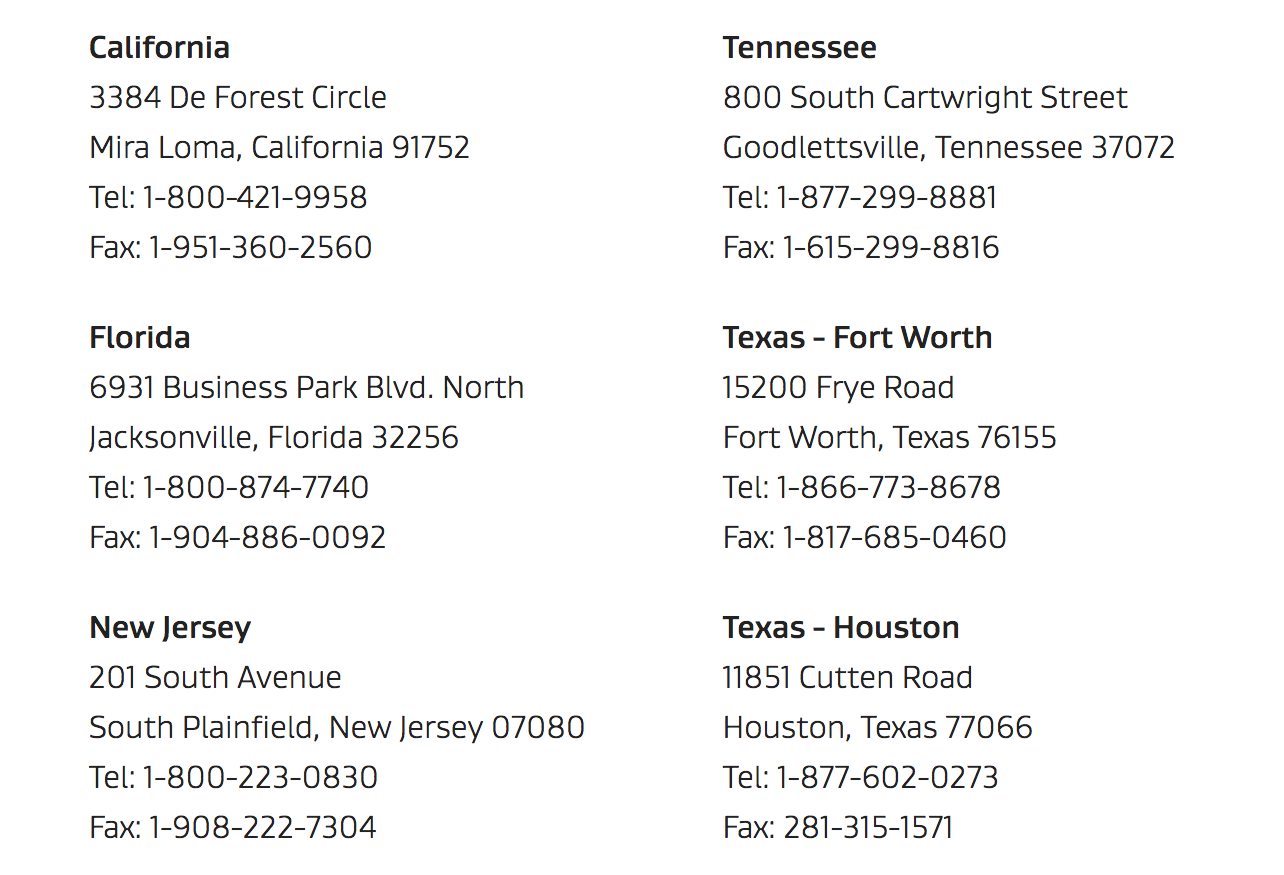 During my brief period of ownership I’ve visited the Prevost factory service facility in Jacksonville, Florida twice and was impressed with the ease and timeliness in making an appointment and the efficiency, professionalism and product knowledge of the staff. As much as time I spent considering major motorhome brands, lack of initial quality and obtaining after the sales service were the factors I found consistently missing from the Class A manufacturers.

For that reason alone I decided to pay a bit more than I would have spent for a new Class A and jump in with both feet to purchase a pre-owned Prevost.

I’ll add that during my shopping phase, Greg Gerber of the RV Daily Report, released a spine chilling eight-part series that went in depth in explaining the issues surrounding the RV industry. Gerber’s series played a major role in understanding that a mainstream RV could not provide the “recreational” experience I was seeking. If you’re shopping for an RV, I consider Gerber’s RV Death Spiral series a must read for every motorhome shopper. Yes, it’s sad that so many motorhome dealers have invested in state-of-the-art showrooms, but have all but ignored expanding service facilities that are equipped and staffed to handle today’s increased demand. For that reason alone I decided to pay a bit more than I would have spent for a new Class A and jump in with both feet to purchase a pre-owned Prevost.

Choosing a converter is in many ways a personal decision as it seems each of the various Prevost converters has its own style and incorporate distinct methods of coach operation. That’s a good thing as it presents potential buyers with choices. Personally I was attracted by Marathon’s transitional interiors, redundant operational systems and clean, uncluttered designs. The bunk layout I purchased is one of the few I’ve found that delivers more than ample closet and storage space with minimal sacrifice. 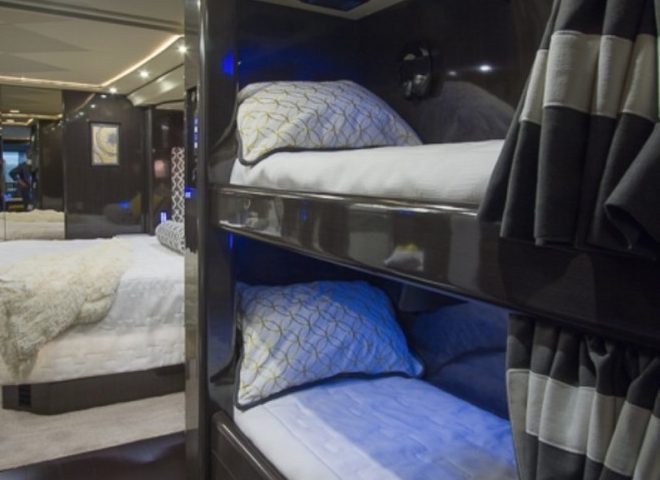 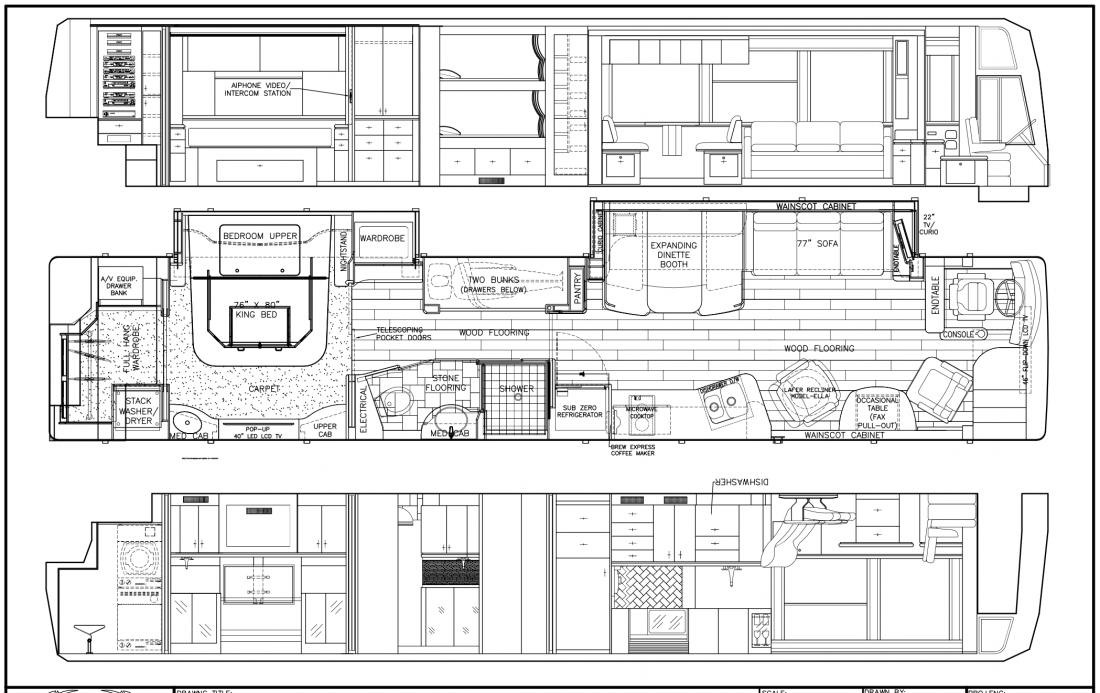 Also, I found it important that Marathon has three factory service locations in the USA so that when “house” service is needed or when it’s time for interior modifications, having locations in Florida, Texas and Oregon made this a fairly confident decision. Unlike some converters I visited, each of the three locations offers a wide array of services and can accomplish anything from adressing mechanical or technical issues to furniture design and remodeling. That was a big plus in my book.

I’ve found the staff at Marathon Coach in San Antonio, FL (Tampa area) to be courteous and friendly and as corny as it sounds, as soon as I completed the purchase I felt as if I had become a part of its family. Being on a first name basis with the folks at the service desk, those in the back offices as well as the guys who are working underneath and behind the walls of the coaches is a good thing and confirms I made right move. I’ll add that within the first day of ownership, while I was camping at Marathon and learning the systems, the President of the company rang the coach doorbell and just stopped by to say hello. Even more impressive, just a few days into ownership he called to see how things are going. Yes, I was impressed.

I’m equally impressed by Marathon’s online marketing efforts as unlike other Prevost converters as well as other higher end Class A manufacturers, they are proactive and constantly updating their website, Facebook and YouTube channels with fresh and timely content. One of the more impressive marketing moves is its Facebook Live broadcast entitled, “Marathon Mondays with Mal.” 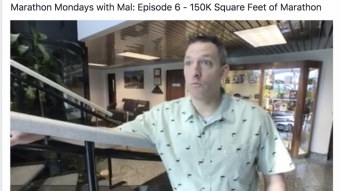 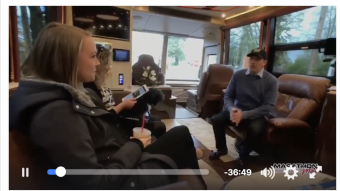 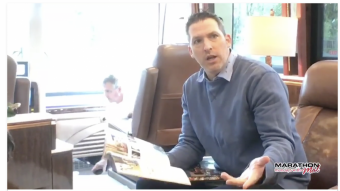 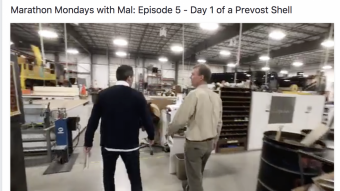 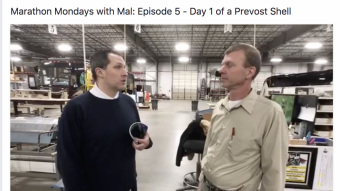 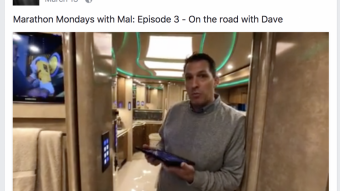 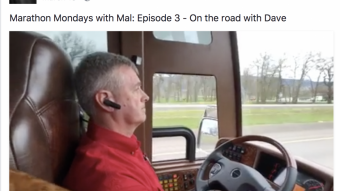 It’s an interactive video session that not only showcases its latest and greatest, it gives viewers a method of asking questions and receiving real time answers. It’s quite innovative as it allows the viewer an easy method of learning more about what they are doing while seeing the enthusiasm of those who design, assemble and service its coaches. Through this weekly series the viewer has the opportunity to meet the people working behind the scenes and at various locations at Marathon and it’s my impression that unlike some of the motorhome factories I visited during my research phase, it seems the walls within Marathon are filled with employees who truly enjoy what they do.

As stated, more posts on my new coach and future adventures on the road and while visiting motorcoach resorts will be coming soon, but until then I’ll use this opportunity to tell you about my latest project and that’s producing a series of videos I’m calling, “Prevost For Newbies.” I have no doubt there’s others out there like me who want to take the plunge into the world of coach ownership, but have questions they might be afraid to ask. In this series I’ll be taking the tact that there’s no such thing as a dumb question and I’ll be speaking with a number of experts in the world of all things Prevost (and Marathon) to assist me in understanding and explaining, in very simple terms, what it takes to operate and maintain a motorcoach of this magnitude. So, stay tuned!

Prevost For Newbies – Part 1: Passenger Side Bays Of A Marathon Coach