Allow me to say upfront that not only am I a user of various Apple products, I’m also a shareholder. Like millions of others, I depend on a variety of Apple devices on a daily basis and, for the most part, each product has proven to be reliable, easy to use and rarely let me down. While I currently own multiple iPhones, iPads and Mac notebooks, I’m typing this post on Apple’s flagship Mac Pro computer.

But, when things go awry…

With that said, I witnessed an odd issue occur with an AirPod case and I’m disappointed in the way that Apple has responded. Here’s the story:

Last year as holiday gifts, I gave an Apple Watch paired with a set of AirPods to my employees. While on a motorhome trip last week, one of my employees housesat with Lucy the Dog. Prior to going to bed, she set her AirPod case on the nightstand. Less than an hour later, when she reached for the case, she noticed it was unusually warm and was stuck to the top of the wooden nightstand. Here’s a photo of the guest bedroom: 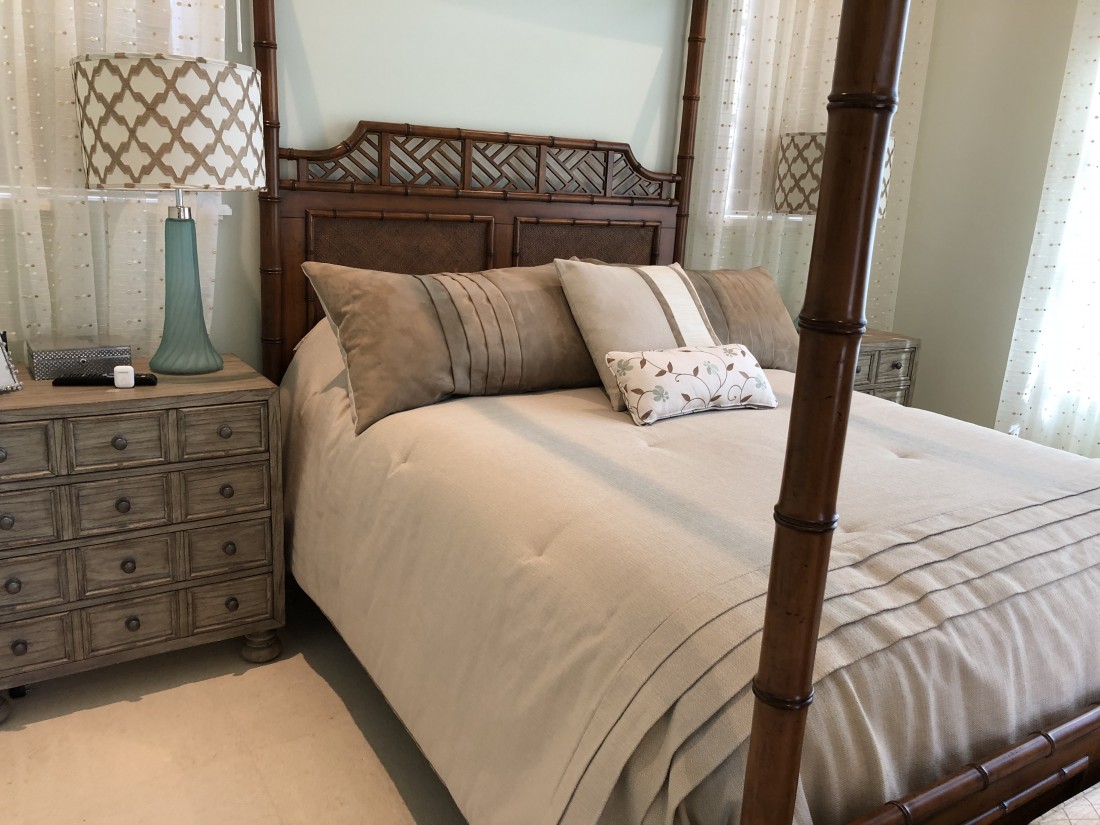 Here’s a photo of the melted case: 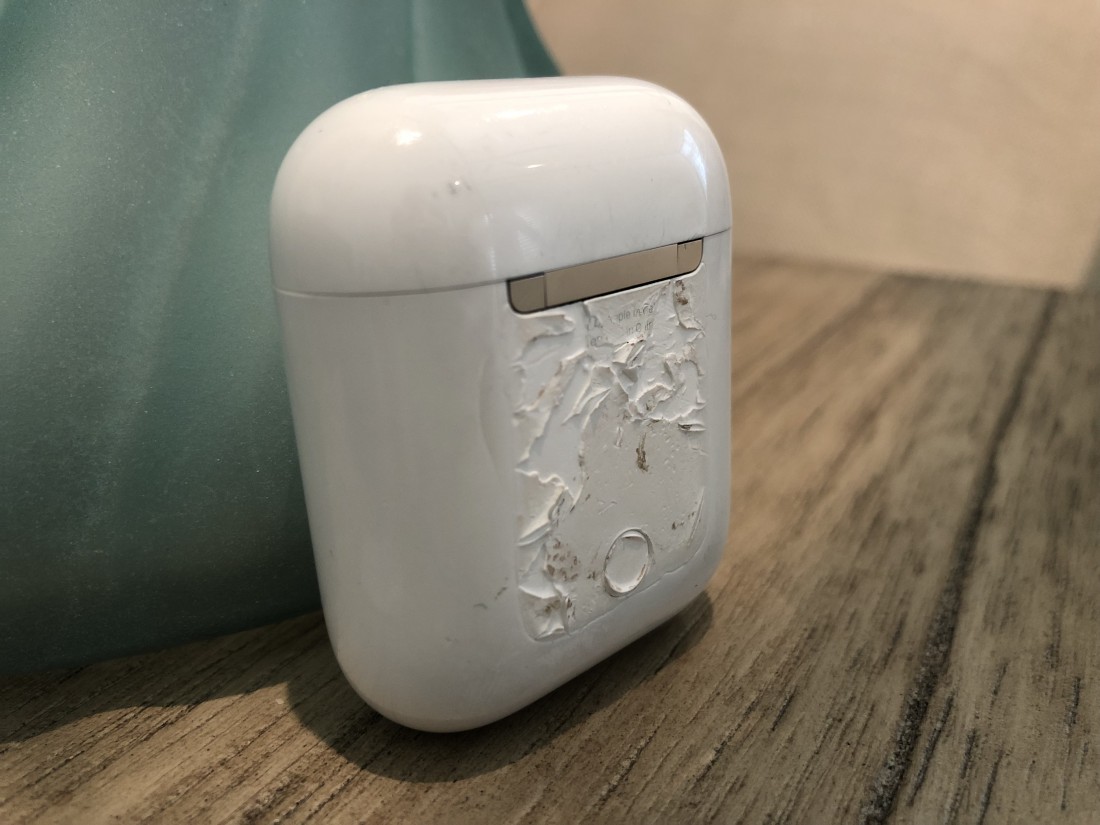 And, here’s the mark it left where the plastic has melded into the pores of the wood top. 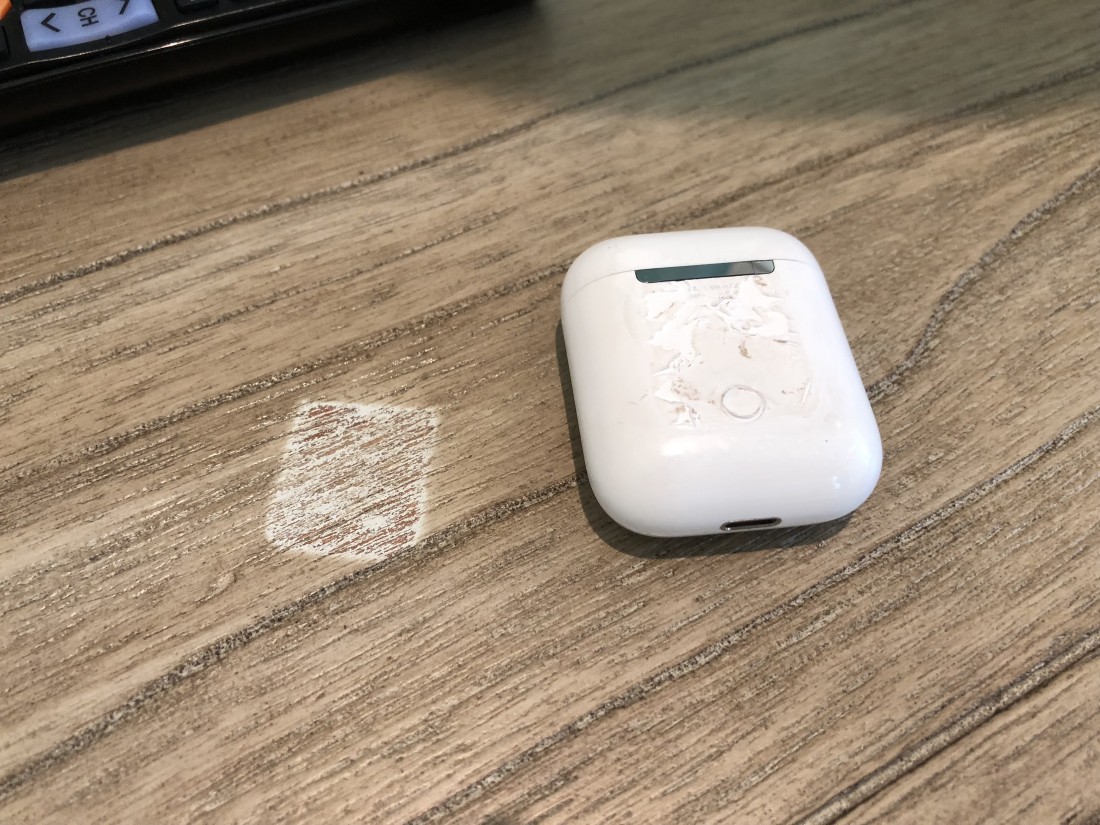 Odd, huh? Please note, there’s no signs of abuse to the Air Pods…just the unusual melting on the one side of the case. 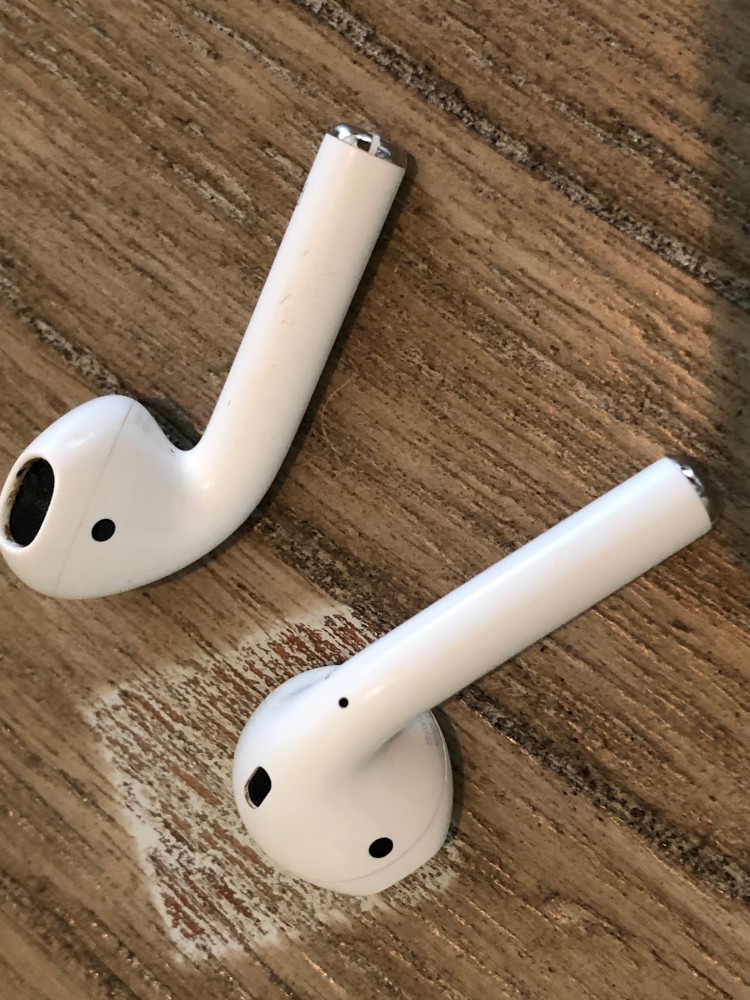 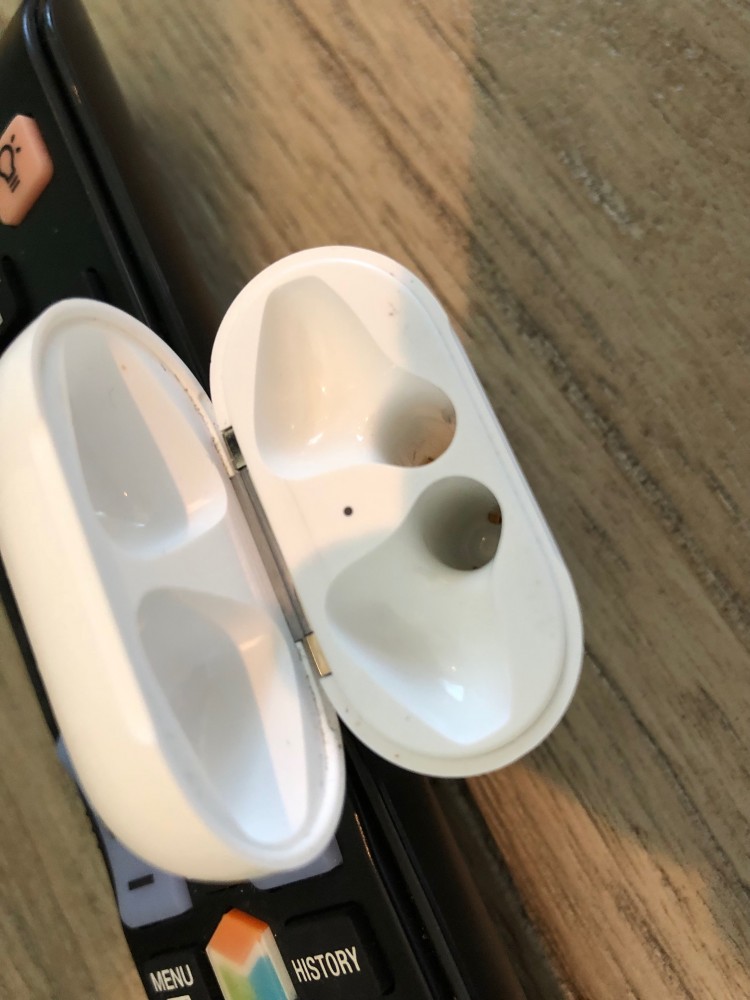 While we attempted to gently rub the damaged area to see it it could be removed, we were unsuccessful as the plastic seem to have melded into the wood surface. Now, here’s where it gets even stranger…

You would think that it would have been in Apple’s best interest to quickly and painlessly rectify this situation as it appears to have been caused by a malfunctioning product. That is not the case.

So, how did Apple respond?

When my employee returned the damaged AirPods to the Apple Store, it took her more than three hours for the Geniuses on staff to arrive at the consensus that something was wrong. I was told they agreed that the product was intact and was not abused. While they retained her AirPods, they did not provide a replacement. Possibly they were out of stock, but it was questionable at that time if a replacement would be provided. A call to me from the Apple store representative during the examination confirmed that I would be getting a follow up call from a higher level Apple representative and until then, a repair number would be generated. My employee left the store without a new pair of AirPods in hand.

Two days later, since I had not received a call, I contacted Apple. I’m sure we all know how long it takes to get the appropriate person on the line. After nearly an hour, I finally was able to speak to a senior person and she provided a link where I could upload the images you see in this post. While I was placed on hold yet again, after viewing the images, she understood this was an unusual situation and asked what I was seeking for a settlement?

A settlement? All I was seeking was to have the furniture repaired and, of course, a new set of AirPods for my employee.

This is not an unusual request as I’ve been down this road before with moving companies and when furniture was damaged. They simply dispatched someone who specializes in furniture repair and an hour or so later, the scratches disappear. There was no out of pocket charge to me and the moving company took care of setting up the appointment with a qualified professional as well as the payment.

Isn’t Apple a “Do the right thing” type of company?

I expressed this to Apple and it seemed to be a foreign concept. But, I was led to believe there was no doubt in their mind that their product caused damage to my property and it was their responsibility to provide a repair. I was told this would take a few hours and was promised a call that evening. The Apple rep promised she would see this call to the end and that I would not have to repeat my experience to yet another Apple employee.

Well, I did get an automated call that evening and was instructed to “press 1” to speak to an Apple representative. I did. But, I was transferred to a different operator. At the same time I received an email from the original representative stating she attempted to contact me, but there was no answer.

Operator number two kept me on the line for quite some time while he read the case notes and stated that since Apple replaced the AirPods, they have no further liability. I explained that we just received the email a few hours ago that the AirPods could be picked up at the Apple Store, but have yet to have them in our hands. And even so, this did not correct the damage caused by their product. I asked for this decision to be escalated and was told it would be and I should hear back the next day.

When that call came, it was operator number two on the line and he simply wanted to reestablish that Apple agreed to provide a new (not a refurbished) pair of AirPods and Apple would have no further responsibility. Personally, I feel this was a poor decision on Apple’s part. I asked if they have received similar reports and I was told, No.

Seriously, has this happened to you?

I’ll ask if you know anyone who has a similar issue with the melting AirPods. Apple seems to think this is a freak thing since no one else has reported the issue. I’m just glad that nobody got hurt and that the damage was limited to an end table. It could have been worse.

Do you think Apple handled this situation correctly?

Place your comments here or on Facebook.com/TheGadgetGuru

Prevost For Newbies – Part 7: What It’s Like To Drive A Prevost