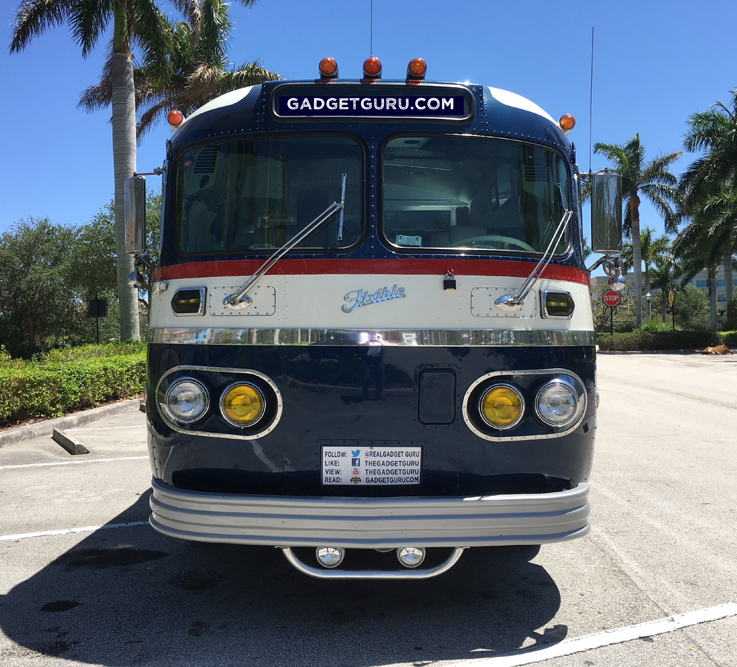 The slogan for this bus should be, “Make America Smile Again,” as wherever it goes, it does just that…it makes people smile!

Andy’s 1957 Flxible Starliner took its maiden voyage from Leiper’s Fork, TN to the Sunshine State in September 2016 and is often seen on the roads and highways of South Florida. Setup as a fully functional motorhome, Andy’s Starliner is stored indoors and is exercised regularly and occasionally appears at select enthusiast events. In February 2017 it was honored with the People’s Choice Award at the Boca Raton Concours d’ Elegance.

In this section you’ll find Flxible related stories and images as well as campgrounds visited in this piece of American history.

The companion video for this post is located below. In the opening monologue of the video posted below, I stated that it’s a bittersweet day at The Gadget Guru. That’s because I was saying goodbye to my vintage bus, but was happy that I found the perfect new home. I... Read More
The Prevost Expo just closed its doors and simply stated, it’s been a busy week. In this video, we’ll give you a sneak peek of the new videos that were produced at the show and provide an update on Andy’s search for his next motorhome. Coming in the next few... Read More
So, what’s it like to drive a 1957 Flxible Starliner? In this video I use multiple camera angles and do my best to demonstrate what it’s like driving a bus of this vintage. Yes, it’s a long video and some will post comments stating I talk too much! But, a bus... Read More
One of the best aspects of participating in car shows and events is that more times than not, the funds raised benefit a noteworthy charitable organization. In the case of the Boca Raton Concours d’Elegance, the beneficiary of various local events over the years is The Boys and Girls Club of... Read More
Until just a week before my first visit, I wasn’t even aware the Aztec RV Resort existed. Considering it’s located near Ft. Lauderdale, FL, and only an hour drive from my home, I was wondering why the forums I frequent weren’t discussing this gated Class A motorcoach community. It only took one visit to... Read More
New Year’s Resolutions seem to be promises you make to yourself, but more times than not, are forgotten very quickly. Here’s one that any RV, Motorhome, Motorcoach or Bus Owner should consider and the best part is, using this video as a guide, it’s easy to follow and it only takes... Read More
Being new to the world of RV ownership, I’m far from an aficionado of RV or motor coach parks or resorts. To date, I’ve only camped at four different parks and each one was only for a one night stay. But unlike seasoned campers, I thought it might be helpful... Read More
Yes, a video of this adventure is located at the end of this post. Those who enjoy the motorhome or RV lifestyle seem to have a language that’s a bit foreign to newcomers. Take towing a car for example. While I’ll simply call it, “towing a vehicle,” those who are... Read More
Now that I’ve purchased my vintage bus, I’m in the midst of shopping for an appropriate tow dinghy vehicle. I say appropriate as my bus is 59 years old and only 34 feet in length and it simply is not wise to attempt to pull a large SUV as it... Read More
The last thing any motorhome or RV operator wants to experience is the panic of pressing the brake pedal (service brake) and not having any stopping power. Because motorhomes and RVs use an air system to activate the brakes, an air brake test should be conducted every time you get behind the... Read More
In a previous post I provided an overview and a tour of a 1957 Flxible Starliner. I’m proud to announce that just a few days after seeing that bus for the first time and taking a couple of test drives through the backroads of Tennessee, I actually pressed the buy... Read More
What the heck is a Flxible Starliner? That was my first question when my buddy Jim invited me to check out the fully restored vintage bus he and his wife Joey have garaged in a temperature controlled barn in Leiper’s Fork, Tennessee. When offered this invitation, I did what anyone else... Read More
(Visited 2,467 times, 1 visits today)